There are a lot of moments in life when you would have liked to have been able to capture a moment on film (well, digitally) and you just haven't got a camera to hand... I had a few today.

Passing through the countryside of East Anglia I saw a drake mallard duck in flight - looking exactly like those statutes you can buy to put on the wall in your home.

Further on in the countryside of East Anglia I saw a pheasant and (I assume) her chick, chiviying the young one around through the long grasses.

Coming back (still in East Anglia) I saw some swans, not swimming on the water, but a small flock roosting in the marshland in the sunshine.

Waiting in the queue for the 'Quick Ticket' machine in the Underground (the machine that says Cards Only and has a big picture of a credit card for the avoidance of doubt) - watching several people in front of me standing with coins in their hands trying to find a (non-existent) slot in the machine into which to feed the coins.

Back at North Greenwich and the (almost but not quite) infinity pool with fountains on the corner of the Pilot Busway - half-term holiday free kids playing in the fountain (let's hope that the Health and Safety miseries don't catch them at it!). 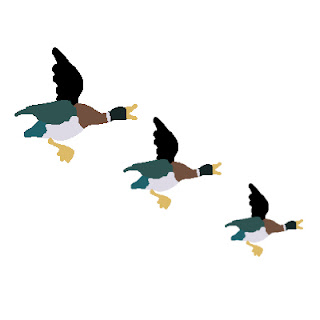