Opening in St James's in 1698, still at the same premises it occupies today Berry Bros & Rudd are a wines and spirits merchant.

Since the reign of George III they have supplied the royal family.

The photos below were taken this year just before Valentine's Day. 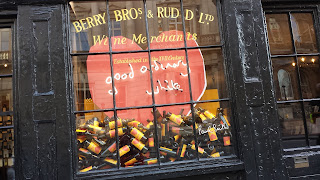 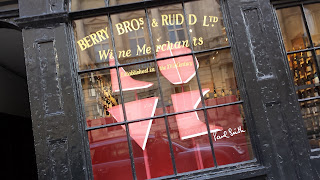 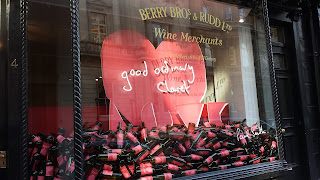 by The Mrs Nat G at 2:59 pm
Email ThisBlogThis!Share to TwitterShare to FacebookShare to Pinterest
Themes: Bits of London, London, Occasional Tourist

What we've been watching (February)

We watch quite a lot of movies; at the moment LOVEFiLM send us two discs every week... although I'm always considering the best way to get our movies.
So this is what we watched in February - come back to see what March has brought us.


This film made it onto the rental list because Husband and I had a vague recollection of seeing 'Ted' and finding it not unfunny.

Maybe the sequel wasn't as funny, maybe our memories were faulty and we didn't find it that funny. Bottom line, it doesn't really have a story and failing in the humour there isn't much left to recommend this.

If you like juvenile or obvious humour then this might be for you; if you can get past the bad language you might make it through to the end.


I never watched the TV show of the same name so I came to this film without any expectations. I found the acting very good; and even though I didn't think I'd enjoy the film I didn't find it without merit.

It's the cold war, there are nuclear weapons, good guys, bad guys and a lot of spying. Predictably I found the film rather confusing, but it was a rather good film (in the manner of a Bond sort of film) - and seems to bet set up for a sequel.


Based in and around the sub-prime mortgage fiasco and the financial crisis this film is more than just a dry look at what happens when you lend money people that they can't repay.

The premise is excellent when Andrew Garfield's character ends up working for the man (Michael Shannon) who evicts him from his home. The plot developments are convincing, and the acting is excellent.

Macbeth
Really wanted to see this because I rather like films starring Michael Fassbender - the scenery was without doubt stunning (somewhat superfluous in Shakespeare who describes in the dialogue where the action is taking place).

I was heartened that the actors were going to use the proper Shakespeare, until the beginning Act 1, Scene 1 and the three witches. Let's face it; a lot of people can quote this bit (I can) so I was irritated beyond belief when they abbreviated the scene.

The direction began to get irritating during the opening battle and our attempt and culture floundered when we just couldn't face the hard work it seemed to require to watch the film.

Heist
When a casino robbery goes wrong the gangsters end up on a city bus. Robert De Niro is excellent as the casino boss and Jeffrey Dean Morgan is just a little too nice as one of the robbers.

With predictable happenings on the bus and with the passengers it is worth watching to the end for the "twist".

So in short; no humour, no action, no story. Give it a miss.


Stunning scenery in New Mexico is a backdrop to what is mostly a two man show - Michael Douglas was very convincing as a shady, possibly criminal business man. His local guide is to take him off on a big game hunt; when an unarmed man is accidentally shot Douglas turns on his guide, the only witness. The guide becomes hunted by Douglas.

Not really much of a plot, it went on rather too long for a film with a very simple premise.


You know the story. This one comes straight from Disney. It is exactly what you'd expect.

There are some big names in among the cast but that is not enough to salvage anything from this film.

by The Mrs Nat G at 2:31 pm
Email ThisBlogThis!Share to TwitterShare to FacebookShare to Pinterest
Themes: Movies 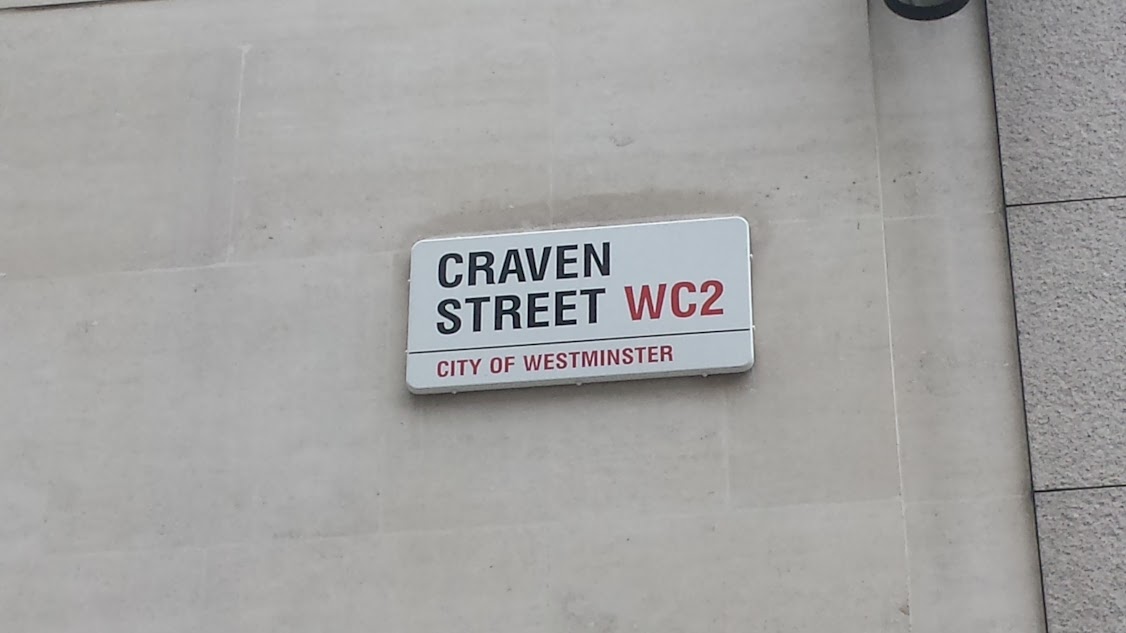 Down in Craven Street (just off The Strand, near Charing Cross station) is a quiet looking house.

There you will find Benjamin Franklin house (No 36 Craven Street), home to the famous American when he lived in London.

It is the only surviving residence of Franklin, one of the founding fathers of the United States (although never President).


The Grade I Georgian terraced house was home to Benjamin Franklin for 16 years, and it is now open as a museum. 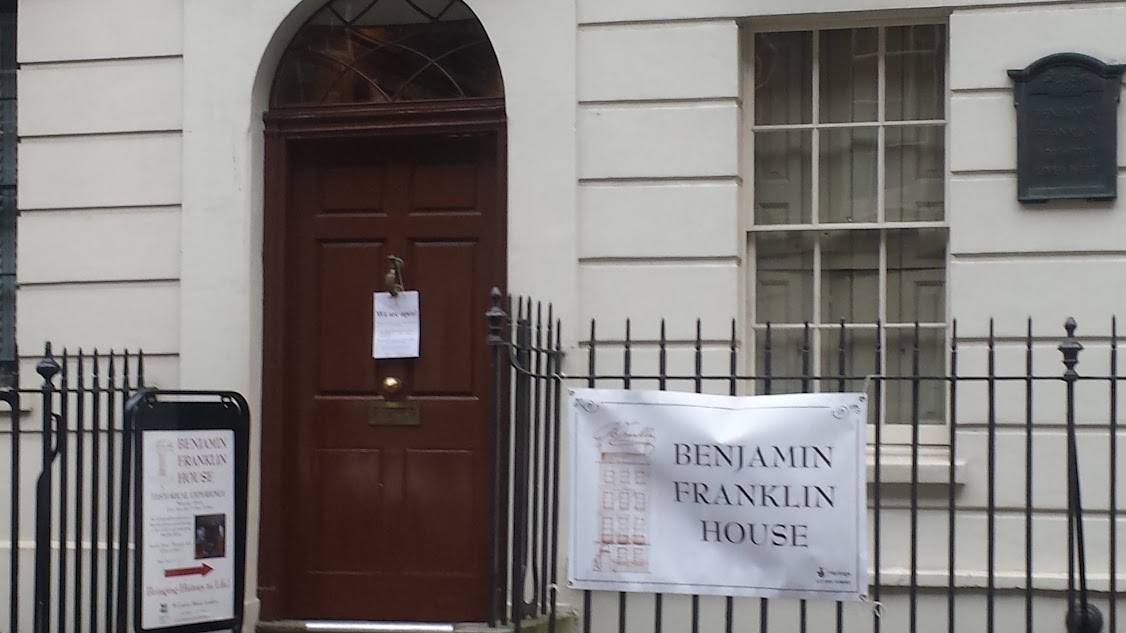 by The Mrs Nat G at 1:53 pm
Email ThisBlogThis!Share to TwitterShare to FacebookShare to Pinterest
Themes: Bits of London, History, London, Occasional Tourist

What we've been watching - January

So this is what we watched in January - come back to see what February has brought us.


The Legend of Barney Thompson
The first thing that recommend this film was the cast; Robert Carlyle and Emma Thompson heading the bill. This is Robert Carlyle's film directorial debut. The story is set in Glasgow - Carlyle plays a barber living a quietly mediocre life and Thompson (only two years his senior) stretches your ability to suspend disbelief as his mother. Thompson's make up is great, her Scottish accent is beyond reproach - but I couldn't put aside that it was Emma Thompson under all that (!). The humdrum life of Carlyle's character quickly spirals out of control as the movie progresses through a series of farcical events.

I found the movie heavy going and the plot convoluted; it made it to the end as a tribute to the acting skills of Carlyle (and Thompson).

Absolutely Anything
A passingly fun sci-fi movie starring Simon Pegg and Kate Beckinsale and including the vocal talents of the Monty Python boys and Robin Wiliams. A group of aliens visit Earth and in order to 'assess' the worth of humanity they pick a representative (Pegg) and give him the power to do anything. The results of this are fairly predictable, although reasonably amusing.

I am not usually a fan of the type of humour in Pegg's movies, but I did make it all the way though this one - the only really annoying bit was the talking dog (Robin Williams).

The Gift
When a young married couple are out shopping a chance encounter in a shop brings an old school friend from the husband's past into their lives. The pace of the film is slow, there are several unresolved subtleties (what is wrong with the wife's health?!) and the denouement was so understated I had to check with Husband to make sure that I'd understood it.

The main problem is that you aren't supposed to like the anti-hero (played by the writer and director) and the two main characters were so inherently unlikeable it made it hard to care what happened at the end.

Survivor
Working at the US Embassy in London a foreign service officer is framed for a crime and has to go on the run before fleeing to New York to prevent a terrorist attack. Pierce Brosnan is surprisingly not on the side of good, and is a murky assassin. I amused myself for large chunks of the film criticising the geography of London employed; general timelines and more. The film could have been a good twenty minutes shorter for all that actually took place. I gave myself a gold star for recognising the cameo played by the now demolished Heygate Estate in Elephant and Castle.

Aliens are intent on invading Earth after they misinterpret video feeds of classic video games as a declaration of war. Adam Sandler is quite believable as a video game nerd grown up, his friend the President a little harder to believe in.

Anyone who grew up in the eighties will probably get a bit nostalgic watching this and remembering when video games were a lot simpler than they are now.

As long as you don't go in expecting too much from this you will probably enjoy the film; it is just good fun.

The Cobbler
Adam Sandler plays a cobbler, from a long line of cobblers. He discovers a machine in the basement which, when used to repair shoes, means that when wearing the shoes Sandler turns into the owner of those shoes.

The plot is disjointed, chaotic and kept making me exclaim "but why would you do that?". I am pretty certain there was supposed to be a message or a moral in the story - but the film completely failed to convey whatever it was.

It was long, rambling and really not worth persevering with.

Jurassic World
Having watched all the original movies in preparation last year we were ready to see the latest offering in the franchise. Apart from my eternal questioning "knowing what happened on the island before, why would anyone ever go there?" the film was exactly as expected.

The graphics and effects have benefited from the advances in technology over the last twenty years, but other than that... the film was exactly as expected.

Spy
I selected this film after seeing an advertising poster on the side of a bus. I feel that I was missold somewhat as the poster featured Jason Statham who definitely is not in the film enough to merit top billing on a bus (!). The main stars are two female comedy leads out of TV shows; Melissa McCarthy and Miranda Hart - never enjoyed their comedies very much or found them funny. Jude Law and Jason Statham give solid performances but aren't in it enough.

It is a rather long winded and not terribly amusing story; I was quite surprised we made it to the end of the film.

Solace
Started watching this. I like Jeffrey Dean Morgan but I'm not fond of Anthony Hopkins. We'd bumped into the DVD in Sainbury's on Friday whilst out shopping at which point I'd categorically rejected the film, much to the amusement of Husband who knew it was one of the weekend films. I found it too slow going and I didn't like the filming style either. I threw in the towel, apparently I should have persevered as Husband said it was a clever film.

Terminator - Genisys
I am a huge fan of the Terminator franchise. I own the early ones on DVD. This gives you everything you expect, the story that we are all familiar with but re-booted and updated to take full advantage of current cinematic skills (including a very young Arnie 'live' in some early shots). The humour is still there, the story adapts, and Arnie even gets to say "I'll be back". They've even left the door open for more...!