First week back at work after my summer holidays - we are now into full on office move panic mode (!)

by The Mrs Nat G at 3:13 pm
Email ThisBlogThis!Share to TwitterShare to FacebookShare to Pinterest
Themes: Instagram, Photography 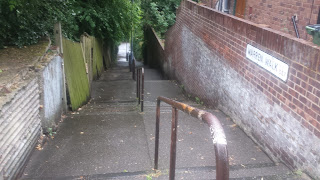 The weather has been all over the place this week. There have been sunny blue skies to dismal overcast grey skies to persistent and even torrential rain.

On Friday I had to go to surgical appliances to get my shoe orthotics looked at. The problem, it turned out, was that I had the on not only upside down but also back to front. Getting this sorted out was such a relief, not least because of the walking that Friday seemed to accrue. The bus stop down the road was shut (a sink hole apparently) and there was no replacement so I had to shuffle all the way to the next stop (down and back up the hill).

After the hospital I stopped at the Co-Op in the Village, didn't find what I was looking for so walked off to the bus stop to go down to the Riverside Sainsbury's. Warren Walk (like a lot of the bus stops you hear announced as you go by) seems an odd name, When you walk to it you discover that like many it is named after an actual street (or in this case a passageway). Warren Walk disappears of down a hill and endless steps between walls and fences and under trees. Quite charming in its own urban way.

by The Mrs Nat G at 2:58 pm
Email ThisBlogThis!Share to TwitterShare to FacebookShare to Pinterest
Themes: MySundayPhoto

The morning of July 7th 2005 for Londoners is a seminal moment for those living and working in London. Like the moon landings or the assassination of JFK everyone remembers where they were, whether out in London or hearing the news at home or at work.

It was around nine o'clock on a Thursday morning. I was out of the office over in the Brick Lane area for a breakfast meeting, accompanying my boss. The meeting had started about 8am and we were heading back to our office just before 9am. As we left the offices we were visiting the receptionist wished us luck with our journey, she'd heard that there was a power outage or similar affecting the tube service.

You have to remember for a moment what the world was like back a decade ago. We didn't have smart phones, barely used the internet on cell phones. Mobile communications were very much about calls and text messages.

We left the offices and started walking back to Aldgate station, where we'd arrived an hour earlier, to take the Circle line back to Westminster. It became apparent almost immediately that what had happened was more than a power outage, it was abnormally quiet out on the streets. I think we must have managed to get through on the phone to our office to find out what had happened that morning.

My most overriding memory of the morning is that I was terrified. Terrorist events had always been in the background of my consciousness, my Mum worked in the City and there was an awareness of disruption through my childhood of IRA bombs and security alerts. I had never been so directly affected before. I remember standing on the street trying to get through on cell phones to let family know we were OK, and my legs were shaking. We gave up our travel efforts and went for a cup of coffee.

In the end our plan of action was to walk back to my boss's flat in Docklands from where he could give me a lift by car back to South East London. I measured the route later, it was a four mile walk (I was a lot more mobile a decade ago).

It was a surreal experience, walking through the streets (with occasional rain showers). It was quiet apart from other people similarly undertaking treks back homewards. Stoicism was the overriding mood that prevailed - a huge juxtaposition to the celebration of the previous day and the announcement of London being awarded the 2012 Olympics.

Sitting back at my boss's flat we were finally able to find out what had taken place that morning, with news cycles constantly evolving as more information came to light. It was, in the end, a short hop through the Tunnel home. We didn't open the office again until the following week, although it was over a year until I ventured back on the Tube.

by The Mrs Nat G at 5:00 pm
Email ThisBlogThis!Share to TwitterShare to FacebookShare to Pinterest
Themes: London, Thoughts

It has been rather a long time since I last posted. There is no good reason for this other than the pace of life. I had a bit of a health wobble back at Easter, but that only lasted about a week.
The problem has been the pressures of work. We're moving offices in the Autumn, we're also short staffed. This means that I've been working four days a week so the work/rest balance is a bit skewed. Then there has been the whole sulky laptop issue which means my home computer time has been minimised.
Now it is holiday time (yay!) so I have more leisure time, and I'm going to sort out my IT issues too. 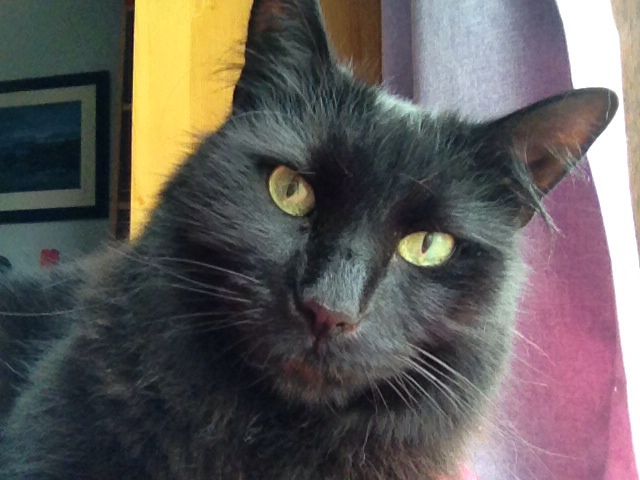 Casper is pleased to be back too!
by The Mrs Nat G at 11:21 am
Email ThisBlogThis!Share to TwitterShare to FacebookShare to Pinterest
Themes: Blogging, Life
Newer Posts Older Posts Home
Subscribe to: Posts (Atom)