Friday night is Spag Bol night in our house. I like cooking with mince it is quick and easy - and most recipes only require what you already have in your kitchen.

Before you start place a large pan of water on the hob and heat it to boil the water for the spaghetti.

First chop up the pepper and the onion. You can use any colour pepper, but I prefer green; an onion (white), tomatoes (red), and a pepper (green) make the Italian flag.

Add the pepper and cook for a couple of minutes to soften.

Add the garlic; if you are using a clove of garlic it will need to be peeled and chopped, I like to use garlic puree instead.

Do not overcook, the garlic will become bitter.

Add the tinned tomatoes and stir well. Finally add the beef stock. Lower the heat and simmer for 15 minutes. 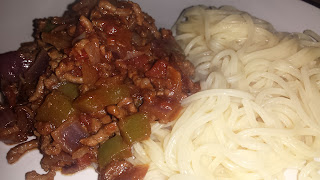 
by The Mrs Nat G at 1:00 pm
Email ThisBlogThis!Share to TwitterShare to FacebookShare to Pinterest
Themes: Food, recipes

It's that time of year again; the last weekend in January is time for the annual bird census conducted by the RSPB, the Big Garden Birdwatch.

My birds (of which there are generally a lot) always take against being counted and are reluctant participants in the event.

As usual the pigeons hijacked the event. The wood pigeon stomped around waiting for the rock and feral pigeons to drop food for collection; they have quite a good system going in which one pigeon sits and pecks the feeder or the tray and the rest congregate on the ground and pick up the bits. The pair of collared doves who often frequent the garden declined to make an appearance.

The small birds darted about; a dunnock, Mrs Chaffinch, blue tits and great tits and of course the robin.

The parakeet family didn't visit en-masse but a couple of the members dropped by to sit in a tree and observe the proceedings. The magpies similarly observed from the distance, in the case a precarious perch on top of one of the evergreens at the bottom of the garden.

It's still quite windy out, although not raining (yet) so it is probably as good as it is going to get this weekend.

The pigeon crew, first a scout appeared to check out the food on offer - then the full scale invasion (!)

One of the parakeet family; arrived with the usual amount of squawking

I enjoyed watching the birds today - I'm sure they'll be around until all the food is eaten!

You can see all about some previous Birdwatches...


You can't navigate Central London without reference to traffic - whether you are on foot, two wheels or four wheels.

Central London has its own unique breed of traffic; there is an uneasy symbiosis between the different 'breeds' of traffic, with each individual sub-set convinced that their needs and priorities are the most important.

The pecking order is determined by size (the bigger you are the more people will give way), officialdom (TfL vehicles certainly think they have the right of way over others) and chutzpah (he who dares wins, manners are rather rare).
by The Mrs Nat G at 1:49 pm
Email ThisBlogThis!Share to TwitterShare to FacebookShare to Pinterest
Themes: Bits of London, London, Transport, Travel

The Southbank Lion sits at South-East corner of Westminster Bridge, next to the building formerly known as County Hall. Urban legends would have you believe that nobody knows the material out of which the lion is fashioned, remarkably untouched by pollution and time.

This isn't true. The lion is cast in Coade stone; this recipe for artificial stone dating back to the 18th Century when it was perfected by Mrs Eleanor Coade; the material is based on ceramics (rather than cement).

The lion was originally located on a brewery (since demolished to make way for the Royal Festival Hall); it then had a stint outside Waterloo Station before being moved again to allow for the extension of the station. 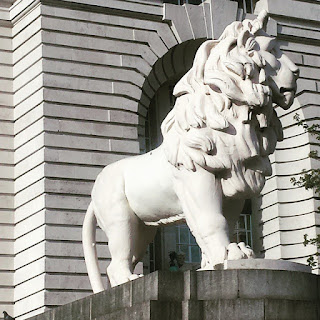 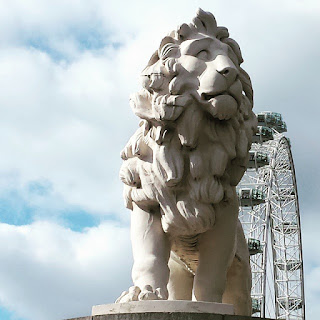 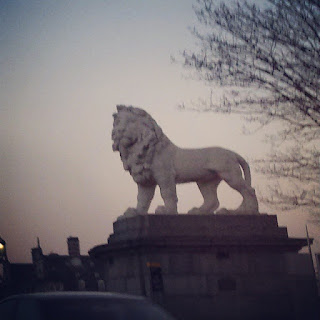 by The Mrs Nat G at 1:31 pm
Email ThisBlogThis!Share to TwitterShare to FacebookShare to Pinterest
Themes: Bits of London, London, Occasional Tourist 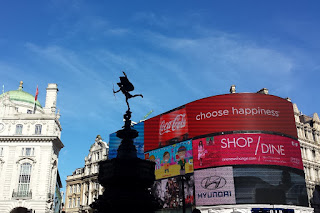 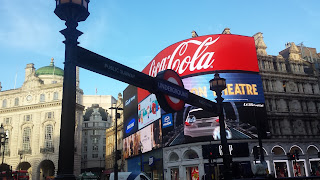 by The Mrs Nat G at 1:31 pm
Email ThisBlogThis!Share to TwitterShare to FacebookShare to Pinterest
Themes: Bits of London, London, Occasional Tourist

There are those shots that you look for that are unique, that capture a moment, that are quirky and so on.

Then there are those shots that you just have to get because they are iconic, because you can't live and work in London and not take 'that' shot.

This is standing outside the underground station at Westminster - you have to get just the right angle to capture the roundel and the tower (including the clock face). Bonus points for getting the shot in different types of weather and at different times of day... (!)

by The Mrs Nat G at 1:08 pm
Email ThisBlogThis!Share to TwitterShare to FacebookShare to Pinterest
Themes: Bits of London, London

Cat in a Box

If there is one thing that cats love above all others it is a box. The propensity of Amazon (and other online retailers) for sending things in boxes rather larger than required annoys everybody except cats - Casper loves an Amazon delivery and a new box.

The box might be too small, it's a good place to count your bottle tops even so.

Handle with care was prophetic, when the box fell off the footstool he refused to sit in it ever again.

Another box too small, even with the packing paper ejected.

One of the best boxes ever is the dining room box, you can sit there and watch the TV

Just in time a new box arrived to replace it though!

by The Mrs Nat G at 3:44 pm
Email ThisBlogThis!Share to TwitterShare to FacebookShare to Pinterest
Themes: Casper, Cats

I joined Instagram way back in 2012 - and I've never looked back. Photos of Casper, around and about in London, out with friends, and even (sometimes) the ubiquitous post of my dinner.

This is my first ever Instagram post, Casper who will be a regular model over the following years.


Routemaster; red London buses, another icon - also a common site during my daily commute through London.


Sometimes it is just about catching those little London moments.


Moments that make you look twice...

by The Mrs Nat G at 1:48 pm
Email ThisBlogThis!Share to TwitterShare to FacebookShare to Pinterest
Themes: Instagram, Internet, Photography

Walking around London, or looking out of the window in the car, I sometimes spot some street signs that have been 'decorated' by guerilla graffiti artists.

Mostly it is the no-entry signs, but there are a few others besides. It is difficult to get photos on the move; and the decorations frequently get moved on.

by The Mrs Nat G at 1:21 pm
Email ThisBlogThis!Share to TwitterShare to FacebookShare to Pinterest
Themes: Bits of London, London 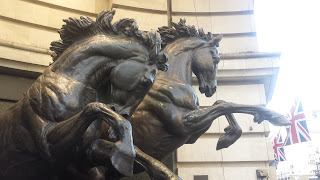 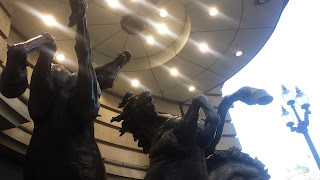 The Horses of Helios is a bronze sculpture by Rudy Weller. The statue is located on the corner of Piccadilly Circus and Haymarket.

Helios, the Greek God of the Sun, rides a chariot drawn by his four horses, Pyrois, Eos, Aethon and Phlegon, from East to West every day.

The statue was unveiled by HRH Princess Michael of Kent in January 1992 and dedicated a 'charity fountain' for the Disabled Living Foundation in 1994, again by Princess Michael.

by The Mrs Nat G at 1:26 pm
Email ThisBlogThis!Share to TwitterShare to FacebookShare to Pinterest
Themes: Bits of London, London, Occasional Tourist

Regular visitors will know that one thing I really like to do in my leisure time is read. Ever since I can remember I've been a book-worm. From my own book collection to reading for school classes to borrowing from libraries.

Belonging to a library was always one of the first things that I did when I moved house (which I did a lot in my student days) and I even belonged to the library in Portsmouth so that I could borrow books when I stayed with my grand-parents on holiday!

At school we were required to keep lists of the books we had read for English Literature class (in an A5 loose leafed file, with reviews and details). Now, in a similar manner, I use Goodreads. Since the acquisition by Amazon the site has integrated seamlessly with the Kindle and when you rate a book after finishing it automatically posts to Goodreads (providing you have linked the accounts); there is even a Goodreads button in the Kindle architecture now.

My books in 2015 included a lot of 'repeat business' where I found a series that I enjoyed and read as much as I could find. The Prime lending library (one book a month) helped in the early part of the year, and I decided to upgrade to the Kindle Prime subscription which lets you borrow up to ten books at a time - I've got my money's worth so far!

Only Time Will Tell
by Jeffrey Archer

The First Phone Call from Heaven
by Mitch Albom

My year of books 2015 included some excellent reads (and quite a lot of average ones) - I'm looking forward to what 2016 has in store!

You can see my reading challenge progress over on the sidebar of the blog, or come and join me on Goodreads!

Nat has read 1 book toward her goal of 100 books.
hide
1 of 100 (1%)
view books
by The Mrs Nat G at 1:00 pm
Email ThisBlogThis!Share to TwitterShare to FacebookShare to Pinterest
Themes: Books
Newer Posts Older Posts Home
Subscribe to: Posts (Atom)