Halfway to the weekend

It has been a strange sort of week this week. I had been expecting to spend most of the week (all of it except Good Friday) at the Court doing week two of my Jury Duty. I discovered that this would never have been the case as not only do the Courts not work Good Friday or Easter Monday - but they don't work Maundy Thursday either! Even better though, once our trial finished on Monday the Jury Manager released us altogether. They'd just had a new intake of jurors that morning and we were surplus to requirements. I arranged with my boss to take my last two days leave (our leave year finishes at the end of this month) and go into the office on Thursday (to catch up with my rapidly approaching 200 emails).

The car went to have the MOT earlier this week. Several hundred pounds just to keep it on the road - I wasn't too impressed. The only good thing was I'd saved £50 on the original quote as once the exhaust was replaced something else didn't need doing after all. I hate the spring when in short succession I have to insure the car, tax the car and have the MOT done; the car is often more trouble than it is worth! 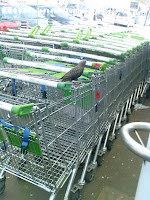 This is a starling I saw waiting to do his shopping at Asda the other evening (!). There are a whole flock of them which inhabit the car park, feeding on bits of dropped and crushed shopping and hopping in and out of the traffic. Such close proximity to people on a regular basis means that they are extremely fearless.

Despite the fact that it has been over two weeks since I stopped taking the Betaferon I was dissapointed to see that one of the injection sites (which had been very painful) has now succumbed to a 'scabby' reaction. This was Monday so I'll be able to see exactly how long it takes to recover. I'm starting Avonex again next Friday; along with a dental hygeniest appointment - what a super day that is going to be!
by Unknown at 11:09 am
Email ThisBlogThis!Share to TwitterShare to FacebookShare to Pinterest
Themes: Miscellaneous, MS
Newer Post Older Post Home