When we were kids my mum had a book called "What to do when there 's nothing to do". It was full of excellent ways to occupy children during school holidays and similar. This of course was back in the late 70's and early 80's before multi-channel TV, video recorders (way before DVD players), computer games and the internet. This was back in the days of three TV channels, books and toys. It was an excellent book - and many hours of fun were manufactured. It would help if somebody could do the same for me now.

Mondays are now the strangest day. I no longer work Fridays or Mondays, which essentially turns my weekend into four days. As I've been working at my mum's the last couple of Fridays they haven' t been a problem. Mondays for some reason I can't deal with. They aren't an extension of the weekend. I feel that I should be at work, and failing that, doing something. But what? A three day working week means a three day pay-packet so there isn't cash to spend. I could do the sort of things I do on a weekend (Xbox, internet, reading) but I've pretty much had my fill of that by Monday.

So, my plan is - sightseeing on a budget. An Oyster bus fare is only a pound a go, so that is a couple of quid travelling - and the whole of London at my feet.

Today I went to Canary Wharf. I still had a travel card to use from last week. Out of curiosity I decided to go to Woolwich and take the DLR. Beautiful new and shiny station (no rubbish, no vandalism, yet). Also no ticket office, and only one staff member. So when my Oyster decided not to work I was at a bit of a loss. The helpful guy on the ticket barrier suggested that I go to the mainline station and get a train. I explained that wouldn't take me where I wanted to go. I ended up having to buy a paper ticket (at a much greater expense than an Oyster ticket). Moral of the tale, don't rely on Woolwich DLR for your ticketing needs. 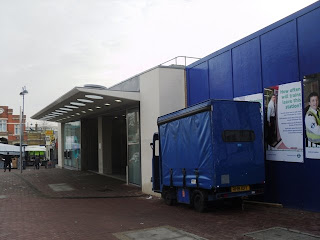