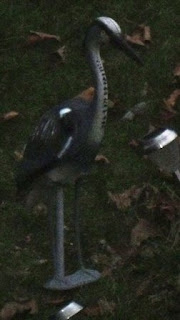 This afternoon I looked out of the bedroom window to see the damn heron standing in the middle of the pond. Standing in the middle of the pond despite the fact the at the protective netting is still down. The centre of the pond is where the plants are, and the netting had dipped into the water, the heron was standing in the puddle that resulted. I banged on the window and the heron flew off. I went out into the garden to inspect the netting (badly in need of replacement) only to see that heron had only gone as far as one of our neighbour's trees. I shouted and waved my arms (much to the amusement of some watching neighbouring cats) and the bird flew off.

I took myself off to B&Q with the intention of buying some bamboo rods in order that the new netting can be raised above the pond (thus avoiding frog spawn disasters). I spotted amongst "pest deterrents" a plastic heron. I bought this and placed  itnext to the pond to discourage any future poaching from long-legged birds

Fake birds in the garden made me think of the bird collection in our bathroom. Our bathroom has a 'rubber duck' theme.

The collection started with a few traditional yellow types some years ago, and over time has grown and grown to the present size (some 30 ducks!). We also have a collage of duck photos on the back of the bathroom door (hiding some damage where a mirror fell off a few years back!).

These were originally a set of postcards which my nearly-mother-in-law took to the copy shop and had enlarged and then laminated.

I spent a very energetic afternoon hammering them into the door wiht small brass tacks. The overall effect is very cheerful in our small rather dark bathroom.


Below are some pictures of the rubber duck collection, it has to be admitted that nearly of all of them belong to me! 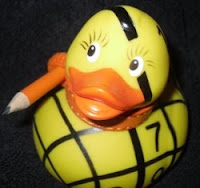 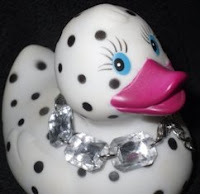 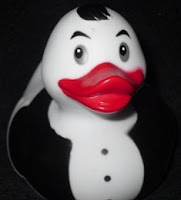 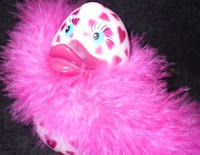 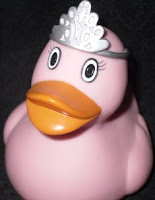 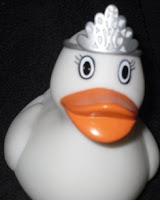 This pair light up when their bases get wet 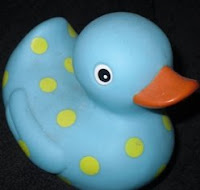 Duck with shower gel (!), temperature checking duck (the base turns red) and ducks that squirt water! 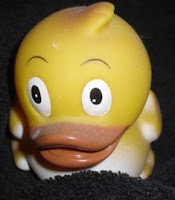 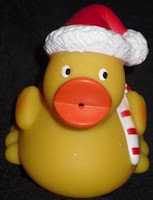 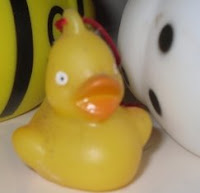 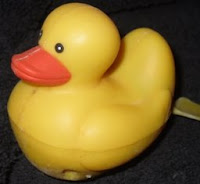 Christmas duck, tiny duck and paddling duck (wind him up and watch him go!) 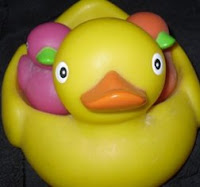 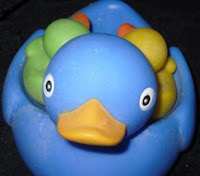