Honestly, we do learn from our mistakes. We were all ready to prepare the pond for the frogs this year, it is just that the frogs have arrived early!

We opened the back door last night (it got rather hot in the kitchen whilst cooking pancakes) to hear splashing from the pond. At first we assumed it was Jaws getting lively after his long winter sleep; but after shining some light on the situations we discovered that the pond was jumping (literally) with frogs. We could hear one in the center (behaving in a rather cliched manner, and making a loud 'gribbit') and we could see a good few trapolining over the netting. One step away from being tangled in the netting.

So, of course. The netting has to come up. Never mind that it is gone nine o'clock and it is dark outside. Rich and I hastily remove the netting startling all the frogs into what remains of the lily pads. A couple of sensible frogs remain in the Frog Pond (where they belong), the rest are just waiting to lay frog spawn. 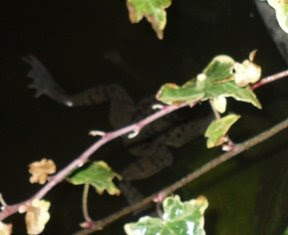 Frog hiding in the ivy 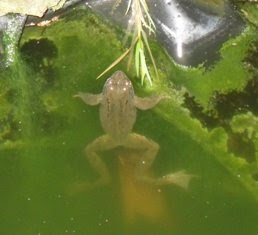