Well - that isn't actually true... there is always weather. The weather this week has, at last, been slightly less full of snow, although rather more full of rain. The pouring rain over several days has raised temperatures and washed away what was left of the snow. Even our garden pond is un-frozen now. 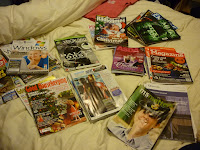 I decided, on Monday, to go through six months (yes, six months) worth of magazine subscriptions. This led to the decision to cancel two of the subscriptions. Somehow, even though I'm not a big magazine reader, I had managed to amass the most amazing pile of back-dated reading material. Some of them, as I mentioned, we buy (Windows Magazine, Empire and SFX); some of them come from various memberships (MS Matters, three different RICS publications); a few of them come from the supermarkets (both ASDA and Sainsbury have their own in-house magazines) and some I buy on a whim (Xbox 360 and Good Housekeeping). I used to buy a lot of different titles, until I discovered that I wasn't reading most of them. I am alarmed to discover that my womens' magazine of choice is now Good Housekeeping... I hadn't realised I was that old!

The most exciting thing to happen this week was the statement from my on-line savings account. This had a surprising amount of money in it - which led to the realisation of a long held dream that Rich and I have cherished. To replace our TV set. When we first lived together we rented a TV from Radio Rentals (remember them!?!) - after a while I decided that, even though we didn't have money to buy one outright (TVs were expensive back then) we could get one on the 'never-never' (hire purchase) and at least one day it would be ours. That was around 8 or 9 years ago. The TV we got, at the time, was state of the art. Although it was a traditional type TV it had a flattened screen (very rare back then) and surround sound speakers which were positioned around the room. It cost well into four figures... and because of this my mantra was always that it wouldn't be replaced until it broke down. 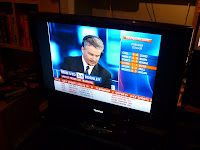 However, as flat screen LCD TV's become more common place and more affordable, and the connections in the back of our old TV increasingly obsolete I decided that it was time for us to join the 21st Century and get a new TV. So we did. Watching TV last night we had to keep turning to each other to exclaim on the superior picture quality of the new TV. Given that it has no additional speakers the sound quality isn't even that bad!

Whilst Rich was assembling the TV stand and hooking up all the peripherals (a process which I have found through years of experience it is best to leave him to) I was catching up on a week's worth of blog reading, emails and other assorted on-line activities.

Somehow I stumbled across this game from Armor Games - GemCraft. I would seriously not recommend getting started with this one unless you have a few hours to spare. It is a simple 'tower defence' game... at first glance. It requires a lot of strategy and there is a pretty steep learning curve in some levels. You get to the stage where you are determined to beat that level you are stuck on before giving up for the day. You have been warned.