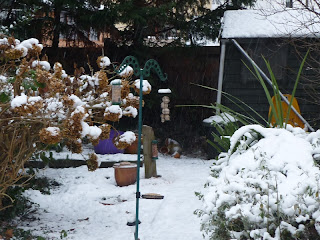 It started snowing again this afternoon. I had reconciled myself to the fact that it wasn't going to melt any time soon - but I had hoped it might refrain from snowing further!

You can just about see the snow falling in this photo - they weren't huge flakes, neither was it particularly heavy... just persistent! 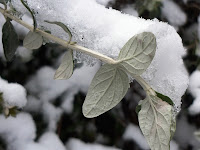 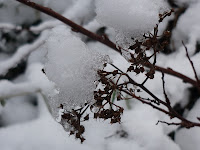 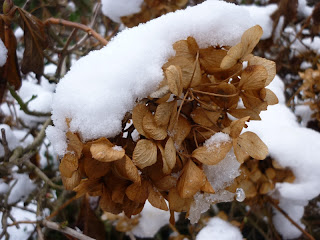 It is doing no good to the shrub life at all... the pond is covered in think ice (small animals are continue to use it as a skating rink) and the birds and squirrels appear to be reliant on us to feed them. 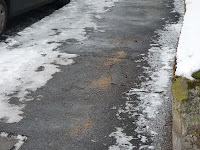 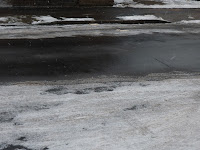 Well done to Greenwich Council who have cleared and gritted the road and pavement in our street (which is not a 'priority route' by any means). That is a development today... just in time for the next fall of snow!

I walked home from The Village on Thursday night and found the pavement conditions were variable at that point. The Village itself had been cleared and gritted and snow was barely evident... some high traffics route just outside of The Village had taken on the consistency of a 'slushie' went ice, passable with care. Further along the snow had partially melted and re-frozen to form a sort of perma-frost, barely passable and only with the utmost of concentration... more ice-rink that footpath. In some quieter areas the footpaths remained covered in compacted snow... that gorgeous crunching sound still to be heard underfoot... passable, again, with care.

I chose to accrue a day of library fines today as I really didn't want to walk up to The Village (and there is no way on earth I'm taking the car out until the snow melts) and as I've an appointment at the hospital on Monday and have to go out I figured that the books can wait.