Run to the Beat 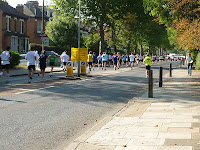 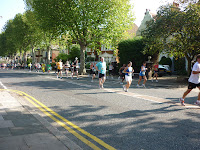 This morning was Run to the Beat - the Half Marathon run around the streets of South London. My fears of noise pollution (based on last year) proved unfounded. The only sound I really heard was a helicopter overhead and the pounding of runners' feet as they passed. Thanks to the Council, anyway, who via the medium of Twitter provided me with an array of contact numbers for the day... more than the organisers ever did when I tried to contact them via their website. 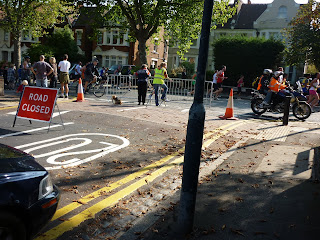 The usual road closures are in place, familiar to those of the London Marathon. The Council and Organisers claim that all areas are still passable by car. For the main part of Charlton though that requires moving your car the night before to the other side of the stranded island where the race goes along the top and bottom and cuts of all streets to the world. As I was out this morning I saw several cars trying to get out the end of the streets - if it happens in the Marathon after twenty odd years it is going to happen in the Half Marathon in only the second year!