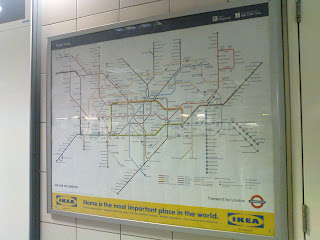 What is wrong with this picture? Look closely now! Have you worked it out yet? If I hadn't known what I was looking for it might have taken me a few moments.

The River Thames has been removed from TfL's tube map. Apparently in recent times it has become 'too crowded' and difficult to read. Not only was the Thames removed, but also the fare zones. Highly suspicious behaviour - after all the fare zones determine the cost of your ticket... who wouldn't want to know those!

Whilst we all know that the tube map isn't geographically accurate it does help to know roughly where you are in the City, and the Thames was very useful for helping with that.

There was an immediate (and predictable) outcry over the missing River. The free newspapers mobilised and Boris (fresh back from New York) demanded the reinstatement of the blue ribbon across the map.

All is right with the world, the Thames is back where it belongs. Mind you, it isn't that long ago that it would barely have mattered one way or the other as the tube (along with London's Black Cabs) rarely went South of the River!