Trip to the dentist

This morning saw my long over-due visit to the dentist. Apart from the shame of admitting the length of time elapsed since my last visit (about 10 years) it wasn't too bad. I'd feared an expensive trip involving drilling and fillings; the reality was - excellent teeth but terrible gums. It would appear that the chronic toothache had been caused by swollen gums around my wisdom tooth and nothing more. The expense is to follow as two trips two the hygienist are recommended before my next visit in three months time - but at least no fillings. Hurrah.

My new dentist is just near Westcombe Park station. In a shocking example of un-joined up thinking I had always assumed that Station Road was a cul-de-sac; even though Rich's friend lives about a street away and my brother also lived a couple of blocks away for several years. Coming back from the dentist I walked through the back-streets of Westcombe Park back up to the Standard for onward bus travel. 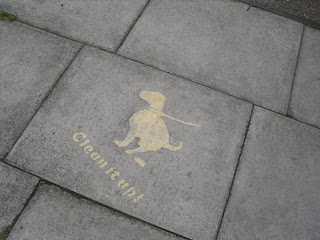 I was amused to see these signs stencilled on the road in SE3  - not that the pavement remained clear - but probably a better notice than the small signs fixed to lamposts in my street about 7ft in the air! 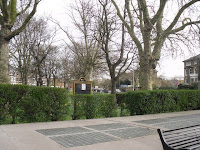 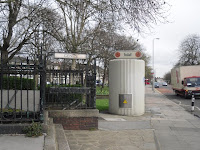 Spring is arriving at the Royal Standard (although you can't really see the daffodil displays in these pictures). What interests me is that although most of Blackheath and Blackheath Village are in the Borough of Lewisham this little corner of London (which is really Westcombe Park) this roundabout, pub and collection of shops are known as Blackheath Royal Standard (after the pub of the same name). This is pretty universal - except for London's 'talking' buses - which insist on "Charlton Road/Bately Park. Even though the sign by the grass (see photo on left) insists this is Blackheath Royal Standard the buses (and Greenwich Council) disagree. I too kthe photo on the right because I particuarly liked the juxtaposition of the stately Victorian toilets with the modern eye-sore equivalent. This is the eponymous Royal Standard, whose rebranding in recent years means that most people have no idea why 'The Standard' is so called.
by Unknown at 4:23 pm
Email ThisBlogThis!Share to TwitterShare to FacebookShare to Pinterest
Themes: Health, London
Newer Post Older Post Home