St Louis Rams host the New England Patriots.
» You can also view all 69 items as a slideshow
The game was back to it's normal timing this year, the clocks having gone back on Sunday morning.

The NFL Game at Wembley seems to demand that there be some sort of tale attached. This year was no different. It had all been perfectly planned until the Better-Half noticed that the tiresome Half Marathon was taking place the same weekend. We already have the London Marathon. Go take your noisy little run to North London somewhere - Hampstead Heath is nice. I digress.

The start and finish of aforementioned run were at The O2. Although the roads were open earlier than threatened it seemed unlikely we'd get a cab to the underground. So we went through the tunnel to Canary Wharf. Neither us nor the taxi driver knew where access to the station was and we ended up at the 'no lift' entrance which was very helpful with the wheelchair and all. At least we got a cab, the first company I called declined to send a cab to Charlton because of the stupid run.

Old hands now at navigating the wheelchair from the station to the stadium; even managing to avoid the ramp by using the secret lift. This happily brought us out right by our entrance and the special wheelchair door.

We found a nice wheelchair height ledge for the drinks and began our annual team bingo, played as a competition this year. Despite taking an early lead I eventually lost to the Better-Half who even managed the elusive Cleveland this year! We saw a good mix of people, including some Packer cheese-heads (yes, wearing cheese hats) and some Olympic staff. I confused everyone wearing my Giants hoodie and my new Jaguars beanie and Jets scarf!

We missed the pre-match entertainment (as normal) but arrived in time to see the home team take the field and the National Anthems. Lessons learned this year and the flags were formed from carrier bags which cannot later be turned into paper aeroplane missiles. Good thing too.

It was cold, it started to rain and we were damp. The game was a white-wash. The Patriots annihilated the Rams. Annihilation to the point that the crowd, who are usually very good at supporting the 'Home' team became most un-British and ceased to support the underdog!
We were ready for home well before the appointed hour of the return cab. So, even colder and damper by the time the vehicle arrived.
Despite the weather and the less than stellar game, it was still a top afternoon out.
by Unknown at 4:06 pm
Email ThisBlogThis!Share to TwitterShare to FacebookShare to Pinterest
Themes: Days Out, NFL

by Unknown at 9:30 am
Email ThisBlogThis!Share to TwitterShare to FacebookShare to Pinterest
Themes: Sunday Social

Here are some more wanderings from that sunny Sunday morning whilst the house was asleep (apart from the cat and I) and I went looking, and really seeing.

In addition to our kitchen my MiL has her own kitchen just off the dining room (also known as Casper's playroom!). It is where we often gather to have a chat as a family, the Better-Half, MiL, Casper and I.

by Unknown at 10:00 am
Email ThisBlogThis!Share to TwitterShare to FacebookShare to Pinterest
Themes: Home

I first read this poem in a 'Sweet Valley High' book (yes, I was a big fan). At the time I didn't really know anyone who had died - but I remembered it later in life. It isn't my typical choice - it doesn't have the meter and rhyme of the romantic poets, or the story - but the sentiment and feeling more than make up for that.

I am not resigned to the shutting away of loving hearts in the hard ground.
So it is, and so it will be, for so it has been, time out of mind:
Into the darkness they go, the wise and the lovely. Crowned
With lilies and with laurel they go; but I am not resigned. 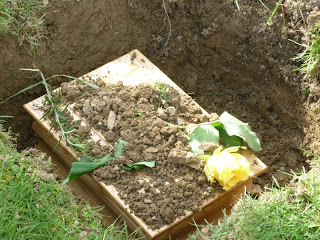 by Unknown at 2:00 pm
Email ThisBlogThis!Share to TwitterShare to FacebookShare to Pinterest
Themes: Poetry


The convergence of five (nearly six as Poultry almost immediately splits from Queen Victoria Street) makes a confusing junction for traffic and pedestrians alike. It isn't much better in the Underground station which encompasses Bank and nearby Monument.

There are three very similar buildings often confused here. On the East side is The Royal Exchange, lonely and majestic between Cornhill and Threadneedle Street. To the North is the Old Lady of Threadneedle Street, the Bank of England. Less defined and much larger. On the South is Mansion House, home of the Lord Mayor of London (not to be confused with the political Mayor of London). The Lord Mayor is in charge of the City and takes office only for a year. The election is celebrated on the 2nd Saturday in November with the Lord Mayor's Show.
by Unknown at 12:30 pm
Email ThisBlogThis!Share to TwitterShare to FacebookShare to Pinterest
Themes: Bits of London, London 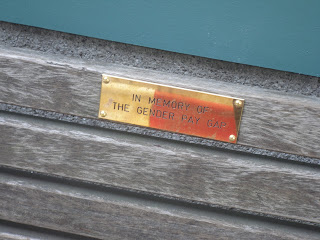 Found in Walbrook near to Bank and Mansion House. Always keep your eyes open in London... you never know what you'll find!

by Unknown at 12:30 pm
Email ThisBlogThis!Share to TwitterShare to FacebookShare to Pinterest
Themes: Bits of London, London

The remains of the Temple of Mithras were uncovered in the Fifties during the construction of the now demolished (unprepossessing) Bucklersbury House. The excavation for the foundations and the discovery of the remains was 18 feet below the street level of Walbrook (on the bank of the original river Walbrook) the remains were carefully reconstructed at the new level. The Temple dates from the Roman occupation of London at the end of the 2nd Century.

The site of Buckersbury is being redeveloped again - I've not been there recently and have no idea what is happening to the Temple.
by Unknown at 12:30 pm
Email ThisBlogThis!Share to TwitterShare to FacebookShare to Pinterest
Themes: Bits of London, London

St Paul's and its iconic dome dominate London. Its dome continues to be a large part of the London skyline, key views are protected in planning laws which means tall buildings can't block the view.


There has been a cathedral dedicated to St Paul on the site since the first Century and the current Wren building dates from the seventeenth century.The cathedral that was destroyed by the Great Fire and pre-dated Wren's was actually the fourth on that site.


At 119m the cathedral was until the 1960's the tallest building in London, and is still in the top 50 list (and needs about 20 new skyscrapers to knock it off). You can, if you visit, and your legs are up to it, climb all the way to the top.

If you get a chance, a service in St Paul's is quite something. I am lucky enough to be invited to the Livery Companies United Guilds Service - and the majesty of the venue and the acoustics of the building make it a place of worship that is quite unique.