What we've been watching (November)

The latest in the "Divergent" series, this film was done no favours by the ridiculous gaps in between releases which meant that I barely remembered the events of the previous film "Insurgent". Milking the cash cow to make trilogies (and more) doesn't always have the Harry Potter recipe for success. This film world is getting tired and predictable... not at all helped by the grim dystopian world which is easily indistinguishable from "Hunger Games".

Backtrack
Mysterious happenings with a pycho-analyst which were so uninspiring that we switched off.

Gridlocked
A movie star is given community service doing a ride along but gets caught up in the events of a training facility being attacked by mercenaries. Dominic Purcell, Danny Glover and Saul Rubinek are the most famous names in the cast, but all the cast give good performances in what turns out to be a very watchable action movie.

Golden Years - Grand Theft OAP
To top up their failing pensions a bunch of pensioners go bank-robbing. A very typically English movie from the "Calendar Girls" type stable. Watchable enough, but nothing special.

Bone Tomahawk
I'm not a Western fan, but generally good reviews and an interesting cast got this film onto our rental list. Billed as a horror-western the plot wanders along at a reasonable pace, but the selling point is undeniably the amusing dialogue.

Concussion
Slow to start, and Will's Smith irritating Nigerian accent got this switched off  very fast.

Precious Cargo
A bunch of 'good' robbers go up against a bunch of 'bad' robbers to perform a daring heist. Fast paced enough action film which is reasonably well written and well acted.

by The Mrs Nat G at 2:14 pm
Email ThisBlogThis!Share to TwitterShare to FacebookShare to Pinterest
Themes: Movies

The other event was Christingle. Made from an orange with a candle set in the top, a red ribbon is tied around the orange, four cocktail sticks are set into the sides (at four equal spaces) and fruits or sweets are stuck on the sticks. The Christingle is, of course, symbolic - the orange represents the world, the red ribbon is the blood (and the love) of Christ, the fruit represent all of creation (and the four seasons) and the lit candle is Jesus as light of the world. The best bit as children was the excitement of making the Christingle and proudly carrying them to a table at the front of the church. 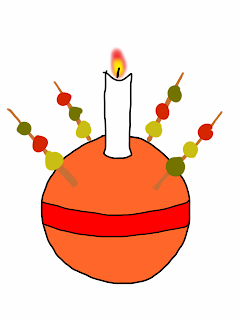 by The Mrs Nat G at 11:32 am
Email ThisBlogThis!Share to TwitterShare to FacebookShare to Pinterest
Themes: Advent, Christmas

What we've been watching (October)

Batman V Superman - Dawn of Justice
Full disclosure, I'm a Marvel fan not a DC fan. We'd waited ages for LOVEFiLM to finally send us this film, in the meantime we'd seen worse and worse reviews. I was ready to forgive reviewers who just don't like superhero movies, but this was a terrible film. The over-exposed stories of Batman and Superman really didn't need another joint exposure who their origin stories (or parts of them).

The Jungle Book
Love the animated film, this started a bit darker (and altogether more tedious); ended up switching off.

400 Days
Astronauts on a simulated mission to examine the effects of deep space travel to test the psychological impacts. Of course, as you'd expect, it all goes wrong and when they exit the craft it turns out everything might not be as it had seemed. I found the end extremely confusing, to the point where Husband rewound and explained to me.

The Nice Guys
A couple of private investigators in the 1970s are investigating a missing girl and a mysterious death. Russell Crowe and Ryan Gosling give absolute stand-out performances and the story is well written with some some amusing moments. Best film of the month.

Hail, Caesar!
Back in 1950s Hollywood a studio 'fixer' keeps the studios stars in line. Many strands are drawn together, I didn't think terribly succesfully.

by The Mrs Nat G at 9:33 am
Email ThisBlogThis!Share to TwitterShare to FacebookShare to Pinterest
Themes: Movies
Newer Posts Older Posts Home
Subscribe to: Posts (Atom)