Every year, just at the wrong time of year for going out in the cold and watching birds the RSPB conduct the Big Garden Birdwatch. It is like a bird census.

My birds don't like to take part. We have such diverse birds as carrion crows, collared doves, woodpeckers and parakeets. None of them show up though. Even the pigeon clan was absent today.

I did my hour in two stints. The first half hour was curtailed by rain and high winds. No birds.

By the second half hour the sun had come out.

I think that 'up with the lark' and 'the early bird catches the worm' are foreign concepts to the arboreal contingent in our garden.

I had a lot of fun watching the three squirrels, the fox made a cameo appearance and Cat5 was going to join in until he noticed me watching from the window.

Casper quite enjoyed the second half hour sitting sniffing the breeze... it all got a bit much when he spotted Cat5 though.

Very dissapointed in the low numbers this year. Starlings, blue-tits, great-tits, the robin pair, a sole pigeon, a crowd of wood pigeons, two magpies, a lone blackbird and the dunnock (who always turns up for Birdwatch).

A set by nat_mach
RSPB Big Garden Birdwatch
27th January 2013
» You can also view all 49 items as a slideshow
by Unknown at 1:14 pm
Email ThisBlogThis!Share to TwitterShare to FacebookShare to Pinterest
Themes: Nature

by Unknown at 12:44 pm
Email ThisBlogThis!Share to TwitterShare to FacebookShare to Pinterest
Themes: Sunday Social


The great thing about winter mornings is the fantastic sunrises!

Join in!
by Unknown at 1:26 pm
Email ThisBlogThis!Share to TwitterShare to FacebookShare to Pinterest
Themes: Skywatch

My bridges start with the first bridge you go under in Central London as you make your way upstream.

The impressive Tower Bridge is a suspension/bascule bridge. The bascule is the opening part which allows boats to continue upstream and the suspension supports the roadway before it reaches the towers. Opened in 1894 it is a Grade I listed structure. It was the development of the commercial docks at the end of the 19th Century which necessitated an eastern crossing, and the design is intended to be sympathetic to the nearby Tower of London

The unprepossessing London Bridge (often confused with it's more colourful Eastern neighbour) is at least the fourth bridge to cross the Thames in that position - and is the oldest crossing point in the central part of the city. The Romans and then the Saxons had bridges here. Then came the famous medieval bridge, lined with buildings (even a church) and also the grisly habit of sticking traitors heads on pikes at the gatehouses. That bridge stood for over 600 years. Its stone replacement in the 19th Century lasted just over a hundred years. It slow subsidence into the river necessitated its replacement and it was sold and shipped piece by piece and reassembled at Lake Havasu City, Arizona.

The latest bridge was completed in 1972 (and doesn't it look like it was), and is a busy conduit of both traffic and commuters from London Bridge station on the south side to the City on the north side. One of the 'rights' of Freemen of the City of London is to drive their sheep over the Bridge - it was actually any livestock and the right was not to drive the animals but to not pay the resulting toll; sheep were most valuable - and hence the half remembered 'right'. As a Freeman of the City, at the 800 year anniversary of  the mediaeval bridge I took the opportunity to lead my sheep on the bridge. It was a cold, wet day, memorable for the recalcitrant sheep and the smell of wet sheep (and dog).

A bridge goes over 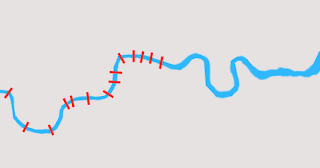 There are a a lot of things in life that it is impressive if you can list them from memory: the actors from the Magnificent Seven (I can't, I just had to play 20 questions with the Better-Half to remember the name of the movie!).

Then the Kings and Queens of England "Willie, Willie, Harry, Stee, Harry, Dick, John, Harry Three, Ned the twain then Richard Two, Henry Four, Five, Six then who? Edwards Four, Five, Dick the bad, two Henries and then Ned the lad. Mary, Bessies, James the vain, two Charlies and then James again.William and Mary, Anne Gloria, four Georges and Victoria. Edward Seven next and then George the Fifth in 1910, Ned the Eight soon abdicated and George the Sixth was coronated; and now we have Elizabeth and that's all folks (until her death).

The States of America is a feat (I like most people seem to manage about 46) and even better if you can follow that with the state capitals (matched to their states). Or for the faint hearted, how about the Great Lakes?

My favourite to list though are things connected with London. There are 32 Boroughs that cover London, there are 25 wards in the City of London, and there are 14 road bridges crossing the Thames in central London, which I toughed on in the post about the Thames.

The bridges in the East for me are easy, I live in South East London and I cross a good few of them regularly. The further West we move the more confused I get. Naming the bridges is interesting not just because it is a show-off thing to do, but also because all the bridges have fascinating histories. We'll meet a few of them over the week.

by Unknown at 12:30 pm
Email ThisBlogThis!Share to TwitterShare to FacebookShare to Pinterest
Themes: Sunday Social

by Unknown at 7:54 pm
Email ThisBlogThis!Share to TwitterShare to FacebookShare to Pinterest
Themes: MM

13th January is National Rubber Ducky Day. Not because in January 1992 29,000 rubber ducks fell off a cargo ship in the Pacific Ocean (that happened three days earlier on the 10th January) and they are still washing up today. No it is because Ernie on Sesame Street has a rubber duck and its birthday is 13th January. The 1970 song on Rubber Duckie song on Sesame Street helped the meteoric rise of these rubber bath friends, so it is only fair!

So, happy Rubber Ducky Day, and meet a few of my friends.


See you next year!!

by Unknown at 6:28 pm
Email ThisBlogThis!Share to TwitterShare to FacebookShare to Pinterest
Themes: Rubber Ducks

Linking up with Ashley and Neely for the Sunday Social
New Year, new friends. Back to the beginning so you can find out all about me (in case you missed it before).
1. What is the name of your blog? How long have you been blogging?
My blog is London Calling - it's all about London; living there, working there, going out there. I've been blogging here since 2006 - but I had two blogs (lost to time and the internet) before that so probably overall about 8 or 9 years.
2. Why do you blog?
I like to share bits of London (my favourite City), the antics of my cat, strange things that catch my eye, great days out - and anything that crosses my mind.
3. What is the first blog you ever followed?
I just spent several minutes about that, and I'm not sure that I can actually remember. We're talking several years ago here! I think it was probably a health related blog written by one of my online friends with MS, probably Access Denied
4. What is your favorite post you wrote in 2012?
This one about Friends. I love the picture (which is my brother and cousin when they were small), and the way technology affects our lives fascinates me.
5. What are your blogging goals for 2013?
First; enjoy! When blogging becomes a chore then I've lost touch with what it's all about. Second, keep writing. I always start well and the get lazy. Who wants to read if you've nothing to say.
6. Name your top 3 favorite blogs.
I have to choose only three?! I have so many! OK - I'm going to choose three I love that maybe you haven't read, so you'll find something new to read today:-

tomroyal.com - Tom is a journalist, so he writes excellent posts (first reason to stop by), he also loves cats. I found his blog when trying to cheat at Assassins Creed when I landed on this post.
Serendipitous - I have now idea how I met this lovely blog, but there are beautiful photos to go with great little posts. I just love the title too.

Fresh Eyes on London - even a born and bred Londoner can learn something new, and this is the place to do it. Again wonderful photos too!

by Unknown at 10:11 am
Email ThisBlogThis!Share to TwitterShare to FacebookShare to Pinterest
Themes: Sunday Social

Happy Birthday to the London Underground. 150 years ago today the first journey took place from Paddington to Farringdon. Look out for special celebratory events all month.
by Unknown at 8:03 am
Email ThisBlogThis!Share to TwitterShare to FacebookShare to Pinterest
Themes: London, Travel 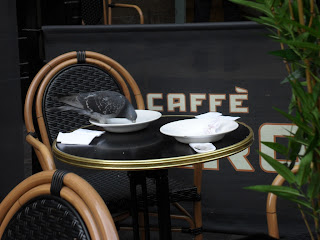 There streets are crowded with people, whether they are workers, visitors or tourists. However there is another group who feel just as entitled to their position in town.

Keep you eyes open around outdoor cafes and other little corners to see what the pigeons are getting up to. What others leave behind they'll happily finish off!

by Unknown at 9:00 am
Email ThisBlogThis!Share to TwitterShare to FacebookShare to Pinterest
Themes: London, Nature

A river runs through it

London is where London is because of the Thames. The river rises in Gloucestershire, and runs for over 200 miles before eventually joining the North Sea at the Thames Estuary (dividing Essex from Kent).

London used to be a bustling port, a hub of shipbuilding. There many quays and wharves (now converted into flats, offices and shops) bear witness to the rich history of the Thames. From Rotherhithe to Woolwich the banks of the river were littered with docks; which fell into disuse when shipping turned to containers and the docks were to small or too shallow for the new vessels. Some of London's tallest buildings now surround the former docks at Canary Wharf.

Settlement on the North side of the river provided excellent natural defence, the Thames was once wider than it is now in many places (the water-gates on Somerset House and the Tower of London bear witness to this).

Today there are fourteen road bridges, six rail bridges, two foot bridges, two road tunnels, two foot tunnels, and of course the Woolwich Free Ferry that cross the river in Central London. The underground and DLR also cross on tunnels and bridges, the Jubilee line alone crosses the Thames four times. From Hammersmith in the West to Woolwich in the East. Of if you prefer you can hop on the Thames Clipper service which stops at various piers on both sides of the river.

The Thames may no longer be the commercial life blood of the City it once was. Now it often poses more of a threat. A tidal river the level of the water varies daily within established parameters; but storm surges coinciding with high tides and rising water levels put the City at risk from flooding. The iconic flood barrier (ironically made possible by the containerisation that killed the docks) provides protection to the City upstream from Woolwich. There is a visitor centre at the Barrier, and it is worth the trip.

A set by nat_mach
» You can also view all 19 items as a slideshow
by Unknown at 9:00 am
Email ThisBlogThis!Share to TwitterShare to FacebookShare to Pinterest
Themes: London
Newer Posts Older Posts Home
Subscribe to: Posts (Atom)