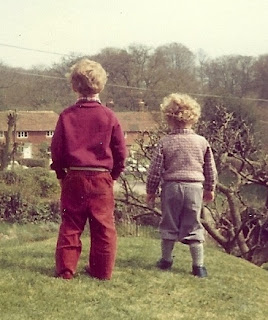 Sometime back around the time this photo was taken (in the early 80s) friendship was a pretty simple thing. You'd meet somebody; at school (or work), because they lived near you or because there was a family connection; you'd find you had things in common and you became friends.

Maybe the friendship lasted through the years, a lifetime, maybe it lasted a summer.

Mostly though apart from a handful of really special relationships friendships had a lifespan.

The other thing, apart from pen-pals (and sometimes these form lasting friendships - but usually only if you met up) you always had met your friends.

Welcome to the 21st Century. You never need lose touch with anybody ever again. Facebook, LinkedIn, Twitter and the rest... friends are everywhere. And not just people you've know for years and met IRL (as they used to say back in the babyhood of the internet; that's In Real Life). I have some great friends on Twitter and Facebook who I've never met. Many of these I know  because we share something in common; things as diverse as the part of London we live in, to a love of cats, to an obsession with a sports team, to being diagnosed with a debilitating illness.

I've not known these friends as long as my school friends, or friends I met through work or at University (or indeed my family) and our connections may not be as deep. They are no less friends though.

This was brought home to me over Christmas when one of my Twitter friends vanished. A great tweeter and I didn't hear from her for over a month. I was worried... like me she has an auto-immune disease and as far as my imagination was concerned anything could have happened.

Unlike Facebook and LinkedIn where people go by their full names on Twitter you just have a handle and don't even have to give your real name (I don't). This means my friend was lost to me.

Happily she resurfaced, she hadn't been well (as suspected). These on-line friendships form communities though... and whilst looking for my lost friend I bumped into another concerned friend of hers and so I made a new friend.

It has to be said though, the increasing (and instant) inter-connectedness of seemingly just about everything fascinates me very much.
by Unknown at 6:47 pm
Email ThisBlogThis!Share to TwitterShare to FacebookShare to Pinterest
Themes: Thoughts

Snow 12, a set on Flickr.
Along with much of the country it snowed in South East London last night. A good few inches.

Happily, today is Sunday. That gives them 24 hours (providing it doesn't snow again) to get ready for not having travel chaos on Monday morning.
by Unknown at 2:41 pm
Email ThisBlogThis!Share to TwitterShare to FacebookShare to Pinterest
Themes: London, Weather

Another London Sunrise, a photo by nat_mach on Flickr.

Join in!
by Unknown at 4:23 pm
Email ThisBlogThis!Share to TwitterShare to FacebookShare to Pinterest
Themes: Skywatch

The Royal Borough of Greenwich

Greenwich joins less than a dozen places in England with the right to this prefix; four boroughs (three within London, one without), one county and three towns.

The oldest dates from the 10th Century (Kingston-upon-Thames) and the newest is today 3 February 2012 (Greenwich).

The Queen is granting the Royal status in celebration of her Diamond Jubilee; but Greenwich's links with Royalty go back to at least the 15th Century. The palace at Greenwich (long demolished) was a favourite of Henry VIII; he married two of his wives there and both of his daughters (future Queens of England) were born there.

Visitors to Greenwich Park today can still imagine the Royal hunting parties that once populated the area.

If you are local to the area drop by the Council website for details of the festivities taking place over the weekend.
by Unknown at 4:16 pm
Email ThisBlogThis!Share to TwitterShare to FacebookShare to Pinterest
Themes: London
Newer Posts Older Posts Home
Subscribe to: Posts (Atom)