Today I was to and from the hospital, which is fortunately only half a mile (two bus stops) from my house.

My first appointment was at half nine. I was off to Orthotics, happily I checked at reception as they had moved across the building since I saw them last year. I eventually found them in Area C of Outpatients (previously only visited for the coffee stand in Area D which it shares the space with.

This turned out to be an exercise in futility and frustration. No appointment, no record of an appointment being arranged. I was sure that this wasn't the case I had rearranged the afternoon appointment when I received two letters for he same time.

I went back home, muttering all the way.

I looked up the letters (finding them in the black-pit of my paperwork). It turned out they were two different style letters sent on different days for the same appointment! Go figure.

Back I toddled in the afternoon for the actual appointment. This time I was in Area B which is where Neurology used to hang out when I first went there. A nice Doctor and a charming student in Rhuematology. I was put on a table and pulled and pushed until I was even more sore than when I arrived. Good news, discharged from Rhuematology clinic. Prescription to be filled by my doctor for a capsaicin cream (pain relief via chili, yes the sort you eat). 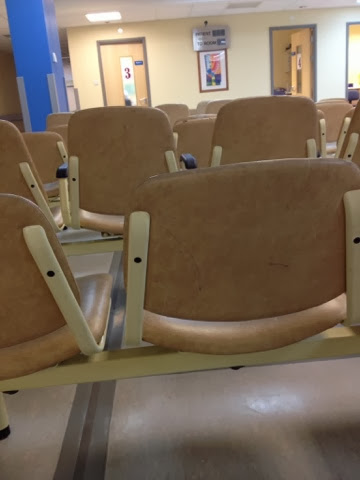 Sadly also sent to phlebotomy. Phlebotomy has never been so empty, two people in front of me. I checked in and was given my printout, terrifyingly last as long as my arm. Ten vials. Amazingly I didn't pass out, which nearly always happens when my rain catches up with the fact that I'm having a blood test! I rewarded myself with coffee and a cake, and it replenish my energy after giving the hospital so much of my blood.

So we wait to see what the answers that come back from the blood test - and rub my knees with chili paste!