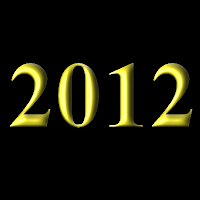 The London 2012 Olympics and Paralympics finally arrived; and in a most un-British manner they were a resounding success. Everything was finished on time, the weather was passable (mostly), the transport worked (mostly) and we even won some medals.

Queen Elizabeth II celebrated her Diamond Jubilee. The weather let the side down - but a very patriotic celebration with flags and bunting (and good practice for the Summer) was had.

Around the world things weren't so good. Unrest and violence continued in the Middle East. Hurricane Sandy wreaked havoc across the Eastern seaboard.

The economic climate doesn't seem to have improved much - double-dip, triple-dip; we've all lost track of the recession... is it now beyond that and do we need a new word?

Personally it's been an average year. My health has been so-so with a seemingly endless relapse that seemed to last the whole year, but with an extra special landed-me-in-bed one to finish up in November. My beloved Great-Aunt died a few months short of her 101st birthday. I have so many fond memories of her; piloting her car round North London with her sister and step-brother and sister on board taking us all to Brent Cross, visiting her flat and riding in the old fashioned caged lift whilst my brother tried to beat us running up the stairs, always being her 'pink imp', and in later years her telling me "Don't get old, darling, it's absolutely frightful". My amazing Grandmother celebrated her 91st birthday. My mother and I had some extra special days out whilst the DVLA had her licence for a year on medical grounds. The cable car, the London Sea-Life Centre and more.