1. What is your favorite holiday season tradition?
Lunch with the Better-Half whilst watching Sky Sport's Christmas Specials... having the decorations up as soon as Halloween is over (our living room is a Christmas grotto)... playing with Casper in the wrapping paper... celebrating New Year with the Better-Half and MiL (and Casper)... so many. For me it is all about time with the family.
2. Do you have a certain holiday movie you watch more than others? If so what is it?
Scrooged, What a Wonderful Life, The Snowman... although I'll watch pretty much whatever they throw on the TV no matter how many times I've seen it. The Snowman has special memories for me... when we were at school we used to have shows for our parents - one of which bizarrely was gym class. We used to do a routine (several years in a row) set to 'Walking in the Air' from The Snowman... one half of the pair would wear a white leotard and the other a coloured, representing the Snowman and the boy. Happily there are no photos of that!

3. Show us your favorite decoration or pinterest decoration you wish you could have 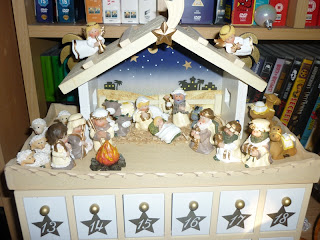 I first saw this advent crib scene on the back of a Lakeland catalogue. What with all the expense of Christmas it was way over my budget. I went as far as buying Fimo with the idea of making my own (never happened) and then though now more of it. Until in January when nobody wanted it anymore there it was in the sale! So I bought it and then had to wait a whole year to finally use it. The stable starts empty and every day a figure pops out the door to add to the scene. The star always comes first and the Baby Jesus last but everything else gets put away at random.

4. What is your favorite holiday song?
Being a chorister growing up I lean towards Carols rather than pop songs. I adore 'In the Bleak Midwinter' - we used to do it with a soprano solo for the first verse and a tenor solo in the middle. I also love Once in Royal David's City. At our midnight service the church would be dark except for the choir carrying candles and the first verse would be sung solo and unaccompanied by candlelight then the lights would come on and the whole church would join in. Quite something. If I have to choose a pop song then I go with East 17's "Stay Another Day".

6. What is on your wish list this year?
It is many and varied. I can't ever really think of anything (I rely on the Better-half and his ability to know what I want better than I do!).