Where would I be without my gadgets?

Ever since my dad got a computer for his home office and I saw 'War Games' when I was a kid I have been fascinated with gadgets and technology.

As for the computer. Well the first 'computer' was an Atari... a keyboard you plugged in the TV with a slot for games and a joystick. That was followed by a machine with no hard drive or floppy drives - everything had to be saved to cassette tape - the beginning and the end of my programming language - Basic. The first desktop PC we had (and 'Amstrad compatible') didn't even run Windows... but something that looked very like Windows 3.1 called 'Gem'. There were so few files on it that I knew what each one did and I have files several times the size of the entire hard drive. As for the internet? Not at home, not back then.

Fast forward a quarter of a century. I'm sitting in bed with my laptop; my iPhone and Kindle next to me. Pretty much everything I need to amuse myself and several connections to the outside world - all within arms length! 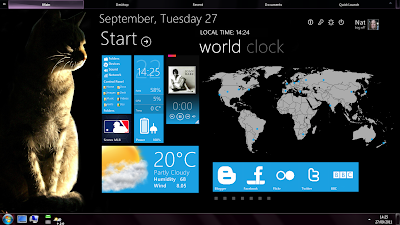 From my desktop I can easily get all the information I want. From baseball scores, to weather... Rainmeter with the Omnio UI puts it all at my fingertips.

The area showing the 'world clock' is actually one of seven tabs - which include RSS feeds and an application launcher - pretty handy... and photos from Flickr.

If I haven't got as far as the laptop then there is, of course, the iPhone. Although my old 3G is looking a bit past it now and I'm quite tempted on the next upgrade to go with an Android rather than the iPhone 4 (or maybe it will be the iPhone 5 by then). My iPhone pretty much runs my life. It keeps track of things I'm supposed to be doing, reading and remembering. It collects email and sometimes even takes and makes phone-calls!

It has a disgraceful amount of Apps that I hardly ever use, kept around on the basis that they might be useful... and ever since the upgrade to iOS4 which means that they can sit in little groups together rather than clutter up acreage of screen space. I'm particularly fond of things like Dropbox, Evernote, Sugarsync and Memonic which work seamlessly on either phone or web.

The great thing about the iPhone is that I don't even need to sit up in bed to use it. Were it not for the fact that I have an iPhone and a laptop I would so have some sort of tablet device (iPad or other). 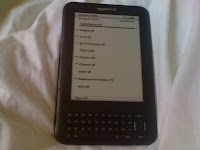 Last but not least is my Kindle. All the books you can read in something rather smaller than a paperback. I have a rule that I do not spend more than £5 on a book - and a lot of them were less than £2 or even free.

I have found the Kindle invaluable for books that I might not have otherwise read... and catching up on the classics I meant to read!