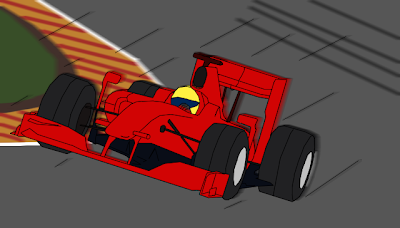 Just like everyone else F1 take a summer holiday. For the whole of August there were no races. The last race (in Hungary) was race 11, just over halfway through the season; so an excellent time to reflect on the season so far.

There is always much to take on board at the start of any season. Drivers come and go as contracts expire, cars change their entire look as sponsors change.

This year (following an FIA ruling late in 2011) teams were allowed to change their Constructor names. This is where it got confusing. Virgin became Marussia (fair enough), Lotus became Caterham and Renault became Lotus! A fair few other teams added parts to their names; especially some of the big boys to credit their sponsors - quite a mouthful Vodafone McLaren Mercedes - we stick with McLaren.

There were of course the usual spate of technical  and sporting regulation changes; my favourite being the limit of a race time to 4 hours to prevent the indefinite suspension of a race due to weather - Canada 2011 (the race that wouldn't end) being the catalyst.

Over here in the UK the biggest news was the broadcasting deal. F1 lived for many years on the BBC. There was a brief period last decade when ITV held the rights; with much controversy over the placing of advert breaks. The BBC then won back the coverage (to pretty much universal delight). Nothing says race day like Fleetwood Mac's "The Chain".

In 2012, however, BBC lost their exclusive hold to Sky. BBC still have some races, and highlights of others - but Sky have them all. They also have a dedicated channel; and unlike ITV they don't interrupt the race with adverts. Most important of all, commentator Martin Brundle went to Sky. After Murray Walker (voice of F1 in my childhood) retired, he became the voice of F1. Sorry BBC - we jumped ship in this house.

The 2012 season has been amazing so far. We started of, as tradition states, (watching the race 'as live' in this house) in Melbourne. The HRT cars failed to qualify for the race after failing to meet the Q1 107% time. That left 22 cars on the track; fourteen finished the race. Despite a safety car Jenson Button who qualified second held his lead and won the race.

Round 2, Malaysia. McLaren looked a dead cert for taking the race after locking out the front row; and Button's strong performance in Australia.  It wasn't to be though. Torrential rain interrupted the race and it was suspended for an hour. Tire choices were crucial and any mistake critical. The race, in the end, was won by Alonso, but the big news was Perez taking second (good tire choices).

Round 3 and off to China. Everything still to play for as no team had emerged yet as the run away leaders of the pack. A race (as many) mired in controversy as Lotus protested the legality of Mercedes rear wing design. This challenge was rejected by the FIA and Nico Rosberg and Mercedes went on to win the race (their first in nearly 60 years). The first time in the season the poll sitter had won the race and the third different winner.

Round 4 and, despite the ongoing political and social unrest, off to Bahrain. Once again the poll sitter, this time Vettel won the race. The race was not without incident - as was to happen in several races Hamilton's day was compromised by slow pit stops; team mates Raikkonen and Grosjean battled for that second spot, and once again tires proved crucial as the extra set Kimi had available kept him ahead of his team mate. Four races, four different winners.

Round 5, much to the relief of the British public back to Europe and off to Spain. Hamilton took the poll but it was stripped from him after his car didn't have enough fuel to return to the pits. This gifted the top spot to Williams and Maldonado. Despite strong challenges Maldonado held is lead and gave Williams their first win since 2004 (less than a month after Frank William's 70th Birthday). This also earned a public holiday in Maldonado's home, Venezuela. In case you're counting that is five races and five winners.

Round 6, Monaco - oddly my favourite race. Oddly as the road race nature of the track means overtaking is nearly impossible and nothing much happens without weather. Schumacher looked like returning to his old form setting the fastest qualifying time, but a penalty saw him drop to sixth. Once more controversy was overshadowing the weekend - this time regarding Red Bull (the car on poll). Am I cynical that it is always the car on Poll which seems to attract the protest. The protests were never followed through, Webber maintained his poll and won the race. Yes folks, that is six winners in six races. Still all to play for!

Round 7 and we're leaving Europe for Canada. The FIA ruled Red Bull's floor (challenged in Monaco) illegal, and though the results stood they had to change the car for Canada. Vettel was the Poll sitter, followed by Hamilton, Alonso and Webber. Vettel started strong but was soon passed by Hamilton, and then Alonso. Now it all came down to tires. The two stop followed by Hamilton was now changed by Vettel and Alonso to one stops (Alonso's team beginning their habit of talking on the radio in Spanish so that their tactics were not understood by their competitors!). The strategies failed and not only did they fail to catch Hamilton but they failed even to take a podium with Grosjean and Perez taking 2nd and 3rd respectively. Seven races, seven different winners.

Round 8 and to Spain for the European Grand Prix. Timo Glock's stomach bug saw the field reduced to 19 drivers; with Vettel on Poll. It wasn't to be his day though; his huge lead he built up was nullified by a safety car and finally his car failed him and forced his retirement. Alonso found his way from 11th on the grid to take the race, the first double winner of the 2012 season. An afternoon of Champions as he shared the podium with Raikkonen (2nd) and Schumacher (3rd).

Round 9 and time for the home Grand Prix, we're in Great Britain. The right amount of rain can bring excitement to a race, and there was the promise of wet weather after practice and qualifying were washed out. Race day, naturally (knowing the capricious British weather) was dry. Alonso, who took poll, finished second. Webber who started second won. Vettel who started fourth too third and Schumacher who started third got nothing. The whole race hinged on which tires you used and when, as after wet qualifying when the race started dry the tires were left to the choice of the drivers. There was an accident, an incident in the pit when Kobayashi overshot his box and Pic was allowed to race even though he didn't make the 107% rule.

Round 10 takes us to Germany. Another wet practice and qualifying, another dry race. Another complaint against Red Bull for a rule breaking car. Plus ca change. Alonso held his Poll to win his third race; but there was drama along the way. An early puncture for Hamilton compromised his race but McLaren used him as a weapon against the leaders to help Button up the field. It worked as Button finished second (although only after Vettel was penalised 20 seconds for gaining an unfair advantage).

Round 11 and Hungary. We've passed halfway and it is the last race before the break. This is a race notable for the lack of controversy. The first time in the season there are no grid drops, penalties or accidents. Hamilton kept his Poll to take first race, Raikonnen came from fifth to take second and Grosjean held on in to keep third from his second place on the grid.

Alonso leads the championship by forty points before today's race. But with 25 points for the winner and the pack behind him (Webber, Vettel, Hamilton and Raikonnen) all pretty close nothing is written in stone, and the championship could be blown wide open. So sit, down, relax and in a couple of hours begin enjoying the Belgian Grand-Prix.