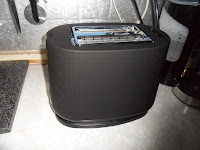 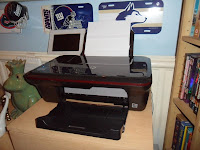 First the printer decided to give up the ghost. Doubly annoying as my little one was already refusing to talk to my laptop so that left us printer-less.


Happily the rather nice wireless model we got was on sale so it didn't break the bank.

The toaster also decided to cease to function this week. Popping bread out barely toasted all over the place. New toaster rather more expensive than I wanted... one problem I was in Bluewater which has a dearth of electrical shops and second problem the toaster has to have a little pop up rack to toast things to big to go inside. It also has to be small as our kitchen isn't very large. Happily this rather attractive matt black model fits the bill.

What the with broken camera and the kettle last month it hasn't been a good time for electrical appliances.
by Unknown at 3:36 pm
Email ThisBlogThis!Share to TwitterShare to FacebookShare to Pinterest
Themes: Home
Newer Post Older Post Home