Day 2 started at 8am when my father brought me a cup of tea, I explained that I thought it was a bit early as we were on holiday and all... apparently 8am is late by my parents' standards... mine too, if I'm going to work! 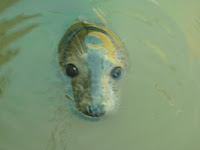 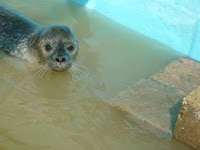 After breakfast we took a trip to the nearby Seal Sanctuary. First of all we were shown inside the barn where they kept the youngest pups who had been found alone (presumably orphaned) on the beach. One poor little mite had been hit by a jet ski - but they all seemed to be on the road to recovery. Outside we found the larger seals... some swimming around - one hiding under the water and popping out occasionally and another chasing her dead fish breakfast around and pretending to catch it. All will eventually be released when they are ready... apart from a big fat one whose name was Wanda who has, apparently, become too tame.

Next we took a trip to Great Yarmouth - mainly for the supermarket but also to have a drive around and see some sights (visit the Occasional Tourist for more!).

After we got home and had lunch we all tried sitting in the garden for a while. A beautiful summer's day the sheltered garden was too hot. I sat and sketched for a while until I was melting. Unfortunately I don't do flora and fauna only buildings so the house and garden didn't yield much to draw - except for the garden gate!

Once the afternoon had cooled a little my father and I took a walk down the lanes near the house. Here we saw a great deal of butterflies, some pheasants (I think), a lot of house-martins and some damsel-flies. 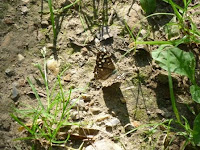 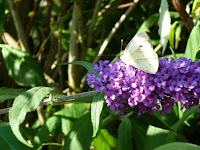 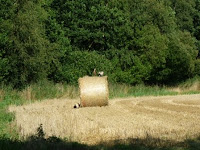 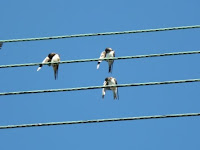