Summer in the garden

I spent a delightful couple of hours enjoying the sunshine this afternoon sitting in the garden. My company was a variety of birds and insects... a few frogs... a neighbour's cat.

The first bird I saw was one of the enormous wood pigeons sitting on top of the bird feeder at the far end of the garden. The frame is supposed to be (but isn't) squirrel proof... the poor pigeon couldn't figure out how to take advantage of the feeders which are made for much smaller birds.

Next visitor was a blackbird. He hopped around the shrubbery at the base of the feeder looking for scraps, which there obviously weren't as he left quite fast. I went to the end of the garden and scattered some seed on the ground for the larger birds.

Next a few great-tits arrived to feast on the fat balls... they studiously ignored the seed feeder - who wants seed when fat balls are on offer! They were followed by a robin who flew to the pond where he promptly sat on a lily pad to take a bath... he then flew into the tree next to where I was sitting where he and his mate looked quizzically at me before flying off. 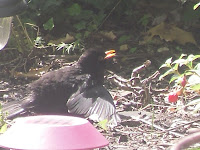 The blackbird re-appeared and was joined by a friend and they had a feast of the seeds (and probably bits of fat ball dropped by the tits). One of the blackbirds then stopped to sunbathe for a while.

Meanwhile the wood pigeons were up in the big tree... falling off branches (as usual) and cooing loudly at each other. 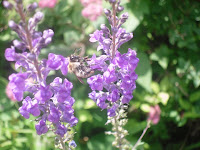 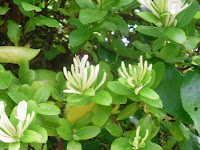 'Old Croaker' is still somewhere in the middle of the fish pond calling to his friends. Rich and I saw him the other week and he isn't actually a very big frog. We were sure it was him as you could see his throat moving as he croaked! There were a few frogs in the Frog Pond enjoying the sunshine... most of them sitting on the bottom.

My final round of the garden was to enjoy the flowers which are coming into their own... this included dodging a good few bumblebees collecting nectar (right) as well as a few dancing butterflies and the dragonflies spendid in blue and green over the pond.

The honeysuckle (right) is at its best at the moment... especially around sunset when the scent reaches the patio! 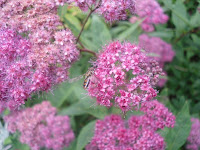 The purple and pink flowers are well known for ability to attract insects and this certainly seemed true this afternoon as the far end of the shrubbery was fairly buzzing with bees, wasps and others (hornets?) that I didn't recognize (left). 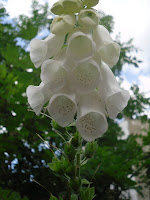 I waited some time (in vain) to see a bumble bee crawl into the foxgloves. The foxgloves are a perfect example of nature at work as they weren't planted in the shrubbery where they are now found and the last time I saw one in the garden it was some feet away at the far end in a completely different shrubbery!
by Unknown at 4:55 pm
Email ThisBlogThis!Share to TwitterShare to FacebookShare to Pinterest
Themes: Nature
Newer Post Older Post Home