I got up at my usual crack-of-dawn go to work time of 6am today. Although I was aiming for the 8am train for Liverpool Street I decided to leave home at 6:30am to give myself plenty of time to make the train. A good thing I did, too! Despite having been closed nearly the entire weekend (except for a brief respite on Saturday night to allow punters to get to the O2) the Jubilee Line was working against me. I decided that the easiest route to Liverpool Street was Jubilee Line to Stratford and Overground to London. Not to be. Signal failure meant that the Jubilee Line was closed between North Greenwich and Stratford. Plan 2: Jubilee Line to London Bridge  walk miles and change to the Misery Line (Northern) one stop to Bank walk miles (and up many many steps) to change to Central Line, one stop arrive Liverpool Street.

Travelling peak hours and on the day ticket buying meant a return fare nearer £100 than £50 which made my eyes water on behalf of petty cash!

My fears that the main line trains would be similarly afflicted as the Jubilee Line following Bank Holiday engineering works proved unfounded. The train left bang on time and even managed to arrive at Norwich 5 minutes early. My fears (based on bad experiences at Cambridge) that I might not be able to find/make my connection also proved unfounded and soon I was on a one coach diesel train to Lowestoft.

Somebody once asked me what Lowestoft was like. Lowestoft is the town furthest East in the UK, you can't go further East without falling into the North Sea. Lowestoft has a beach (which I've yet to visit) and a lot of seagulls (you can't miss them). My answer to what is Lowestoft like was, it is like Woolwich but with seagulls.

The train journey back was almost as painless although I missed one London train due to a late arrival from Lowestoft. I even managed forty (or perhaps it was eighty) winks on the way back... and the train gods were smiling on me. The Jubilee Line was recovered and so I got a train from Liverpool Street to Stratford and then on to North Greenwich, cunningly missing all the rush hour traffic from Central London. 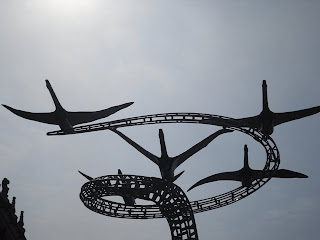 Public art in Lowestoft, see what I mean about seagulls
by Unknown at 6:35 pm
Email ThisBlogThis!Share to TwitterShare to FacebookShare to Pinterest
Themes: Travel
Newer Post Older Post Home