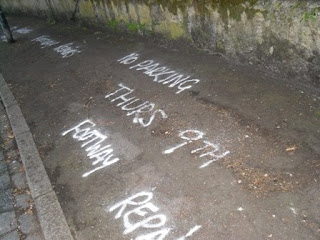 As I was on my way to work this morning I noticed a line of cones towards the end of the street, blocking off approximately five parking spaces. About two thirds of the cones had been moved onto the pavement (or were they put on the pavement as the cone guys didn't arrive early enough?) - either way, the three cars parked in those bays had no excuse as the writing was on the wall (well on the pavement) in letters half a foot high.

As I stopped to take the photo two workmen drew alongside and asked what I was doing, telling me that I should take the picture after the works had been done. I explained my amusement  that the cars were parked next to the cones and signs asking them not to; the response... a rueful grin and the observation "People are good, aren't they".

Let's just hope that some joined up thinking has been done by the Council as large parts of the street have yellow 'parking bay suspended' notices and there was a leaflet drop recently; they are replacing London's Victorian water mains again. I can only assume that they are going up/down the other side of the street this time as we've already been visited last year... just after they resurfaced  the street. See what I mean, joined up thinking!
by Unknown at 1:22 pm
Email ThisBlogThis!Share to TwitterShare to FacebookShare to Pinterest
Themes: Miscellaneous
Newer Post Older Post Home