I got off the bus by Trafalgar Square this morning as something caught my eye. Was it a new display on the Fourth Plinth at last? No - it was 'Vigil'. This is a remembrance of the First World War. The names of 68,000 Canadians who died in the conflict are being projected onto Canada House - one by  one. This year is the 90th Anniversary of the end of the 'War to End All Wars'. 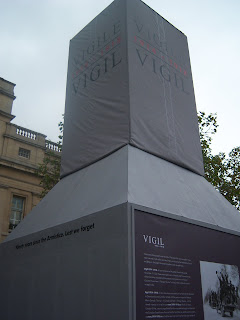 I also bought my second Poppy today. My first Poppy was affixed securely with a pin to my coat two days ago. This morning I noticed that whilst the pin remained securely fastened the Poppy itself did not. I'd like to think that someone picked it up and gave it a good home, but given the disappointing amount of Poppies I've seen this year I doubt very much that would have been the case.
by Unknown at 12:51 pm
Email ThisBlogThis!Share to TwitterShare to FacebookShare to Pinterest
Themes: London
Newer Post Older Post Home