Hotel, Kyiv - 7:55am
The window in my bedroom wasn't properly closed last night and fell open during the night. No wonder I kept waking up cold!

So. Last Kyiv breakfast. I decided to investigate under the silver lides today. So in addition to my usual bread/cheese/meat combinateion I had some omlette (very good) and what appeared to be pancake stuffed wiht cream cheese (very weird). All quite nice.

Thought I should eat well today as the airplane food wasn't up to much on the way out. 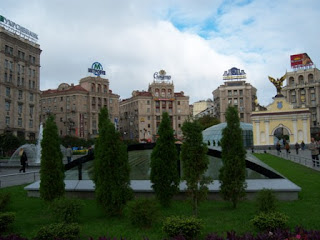 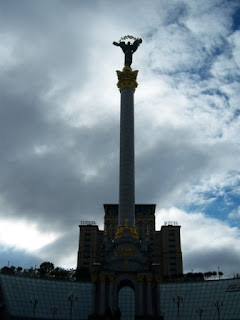 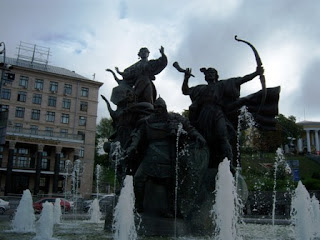 The founders if Kyiv.

Borispol Airport, Kyiv - 11:00am
So a couple of my colleagues took me on a very energetic sightseeing tour of Kyiv. We saw a statue of King Vladimir who converted the city to Christianity... Independence Square (along with it's subterranean shopping centre)... the back of the House of Chimeras, the Presidents office and a lovely old palace, also a 10th Century Monastery. (see photos above)

Back in the queue for passport control!

Schipol Airport, Amsterdam - 2:50pm (local time)
The terrifying Borispol experience is at last behind me. Very few of the signs there seemed to be dual language. I never had any idea where I was or more importantly where I was supposed to be. I was one of the last to board the flight!

Schipol is less terrifying as the boarding card I got in Kyiv actually told me the gate from which my flight would depart here! Yay.

There are some comfy lounge chairs here, which is good as my flight isn't for ages!

Schipol is huge. I went to the main shopping bit and the departures board there gives walking times to the gates... one of which was apparently 22 minutes away!

I did a bit of shopping, never had much of chance in Kyiv. Just a few silly souvenirs. Very bizzarely also saw a Mini Cooper decked out in the Union Jack and a Williams F1 car. The latter
particularly weird as surely it should have been a Spyker as they are Dutch?!

Soon be home now... looking foward to English language and driving on the right side of the road... and seeing Rich at last!
by Unknown at 3:18 pm
Email ThisBlogThis!Share to TwitterShare to FacebookShare to Pinterest
Themes: Kyiv
Newer Post Older Post Home