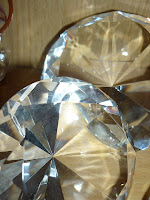 No, not one of those.The Crystal is a 'sustainable cities initiative' - a sort of interactive science museum, located on the edge of London's Victoria Dock. It is a good excuse to take a trip on the Emirates Airline or on the DLR - located as it is just north of the river and just west of the ExCeL.


Even though it is half term this week we arrived an hour after the doors opened and it was fairly quiet inside. You are handed 'swipe cards' which interact with the exhibits and directed upstairs to 'The Pumpkin' for an introductory movie. This is quite something. Mostly images and sounds; the theatre is quite small and the film is projected onto a curving wall and an equal amount of floor. With cinema screen levels of sound it is an immersive experience.

The rest of the exhibit, whilst beautifully presented did lack structure. It was hard towards the end to figure out if we'd seen everything (especially as I'd put the map in the Wheelie-Walker!). It would make a great day out for children as everything was extremely interactive; and as the Better-half observed over lunch it was great to see so many children becoming aware of sustainability at a young age. If your knowledge/awareness of sustainability is starter level then you could probably spend at least half a day at The Crystal. The Better-Half watches a lot of science shows and reads a lot of science articles so he is well versed in things sustainable, and me, well I'm a Chartered Environmentalist so it is my job to know these things.

I particularly enjoyed the 'build your own building' exhibit - I was most upset when I only got a 'B' rating - but a quick change of one aspect gave me an extra percentage point and the 'A' that I deserved!