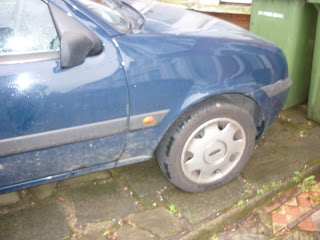 The car is in disgrace (along with Tinker who chewed his way into a plastic tub of fish food).
We were out yesterday afternoon on a brief jaunt. Objectives; show the better-half where the courts are for his jury service next week and run to the shops - aim, something to lock our living room door and keep the naughty kitten out when he isn't supervised.
We were barely into the trip, when the car, which had been acting a bit oddly, failed to accelerate along with the engine and a burning smell permeated the interior.
We pulled into a side street, a did what anyone else would do, called the AA. Whilst we waited for them to arrive we read the trouble shooting section of our Haynes guide which we (pointlessly) keep in the back of the car. We decided from this that the clutch had gone. A diagnosis confirmed by the AA man when he arrived.
Our next problem was, what to do with the car? Not knowing any garages apart from the place the car gets its MOT we opted to get towed home. That was probably the best part of the day. Being flat towed is a somewhat bizarre experience, you steer - but no pedals; and you can't stop yourself checking for traffic at turnings and roundabouts even though there is nothing to be done, tethered as you are to the back of a van.
Car deposited in driveway. Shopping still to be done (in the rain). About a third of the way through my legs had given out. We stopped for a (very) late lunch at McDonalds before finally getting home where I went straight to bed for a nap.


Got a few quotes for getting the car fixed this morning, but the trouble is that I have to find somewhere near enough that the car can limp to at twenty-five miles an hour (current top speed).  Mind you, if I go in rush hour traffic nobody will notice!
by Unknown at 3:15 pm
Email ThisBlogThis!Share to TwitterShare to FacebookShare to Pinterest
Themes: Home, Travel
Newer Post Older Post Home