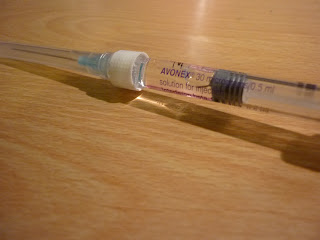 I love weekends right now. Friday night is time for the weekly dose of Avonex. This is my 'disease modifying drug' that I take for my MS.

The selling point is that it gives you 33% less relapses or the relapses you do have are 33% less severe. Of course, there is no way of testing this without stopping taking it.

A few years back my Neuro decided that it wasn't strong enough and I should take Betaferon instead. Betaferon is taken every other day subcutaneously (which means a smaller needle) unfortunately my skin was extremely intolerant to this so back to Avonex it was. Avonex is given intramuscularly so I don't get the same skin reactions; sadly the needles is about 150% longer and it usually hurts quite a bit - sometime it bleeds too and I end up with a lovely bruise for a week. Lucky it is on my thigh and I no longer wear skirts that short! DMDs are famous for their flu-like side effects. I distinctly remember the first time I took Avonex. It was the same night as BBC's Children in Need, which I don't normally watch. I remember on this occasion lying in bed aching and shivering and feeling generally rotten and dosing on paracetamol as often as the box would permit. Happily I've never had it that bad again, and I think that the every other day Betaferon helped build an immunity. I still have occasional bad nights but they are rare. 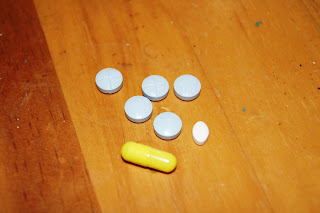 Right now the evenings aren't the only problem. My MS Nurse suggested a five day course of steroids were in order. Those are the blue tablets on the left. They taste vile. The only thing that helps is Robinsons Fruit and Barley Peach flavour, strangely it must be peach. They should put that in the advisory leaflet. Fail in this and the horrid taste will hang around all day no matter what you eat and drink. The yellow tablet is Omeprazole which protects your stomach from any effects of the steriods - a fifteen day tapering course they'd add Calcium as well. The little white tablet is anti-histamine which I take for random pruritus (that's the medical term for itching) - they also help my hayfever in the summer.

Not shown here is the night-time tablet Clonazepam which is a muscle relaxant and cures my legs of stiffness and crampiness - bonus side effect it sends me to sleep.

So that's me - a chemical compound. No wonder I don't feel quite myself... hopefully soime will start doing some good soon!
by Unknown at 7:24 am
Email ThisBlogThis!Share to TwitterShare to FacebookShare to Pinterest
Themes: MS
Newer Post Older Post Home