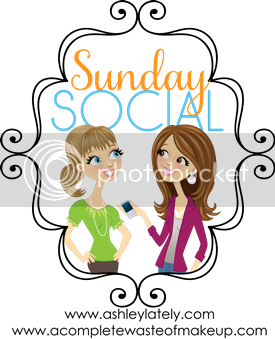 Linking up with Neely and Ashley again
Celebrating one year of the Sunday Social!
1. What is your favourite social media outlet?
I'm torn on this one. I like Facebook because it keeps me in touch with friends scattered around the globe, I can see their kids growing up and generally keep in touch. I love Twitter because it is an endless conversation (day and night) and I have made some lovely friends there.

2. Do you subscribe to any daily new reads? If so, which ones?
No, I don't have time... and then things pile up... and then I spend my entire weekend attached to the internet. Quite often my day to day email account (the one that receives offers and newsletters) has over a hundred emails by the end of the week... and right now there are still about 50 unread blogs in my Feedly (oh dear).
3. What is your favourite magazine to have by the pool?
I am just not a magazine girl. This surprises me, given my amazingly short attention span! I don't really follow celebrities doings (so that rules about 50% out) and the women's mags I'm either too old, or too scruffy. I do read BBC Focus on my iPad and skim through Web User and SFX (but only because we have subscriptions). Is it bad that my favourite magazine these days is Good Housekeeping?!

4. What is your favourite summertime song?
I'm not sure I have one. I've just been looking over my iPhone's playlist and nothing stands out as 'summer'. The only one seems to be the official song of the 1998 football world cup (which is very summery) Carnival De Paris.

5. What is the best summer concert you've been to?
I am not really a concert goer. I don't like crowds and crowded places. Having said that in 1995 (which was the 25 anniversary year) I went to the Glastonbury music festival. We arrived on the Friday and left on the Monday... the sun shone (with a bit of a grey morning on the Saturday) the entire time. I'd never been anywhere like it before. It was the height of 'Britpop' and Oasis, Pulp and The Cure were headline acts... Dreadzone and The Prodigy were also there... and on Sunday morning when everyone else was still asleep there were the Bootleg Beatles. I went again, two years later... it rained the whole time, the mud could take your wellies off; the only act I remember was the Chemical Brothers. So Glasonbury '95 was my golden concert/festival moment.