In a protest against perceived internet censorship - legislation proposed in the US by the House of Representatives - Stop Online Piracy Act (SOPA) and the Senate's Protect Intellectual Property Act (PIPA); a number of websites have changed their usual look. I haven't found it widely participated. Whilst #Wikipedia and 'Imagine a world without free knowledge' are currently trending topics on Twitter which otherwise seems to be operating as usual. Similarly I noticed nothing unusual at Facebook. 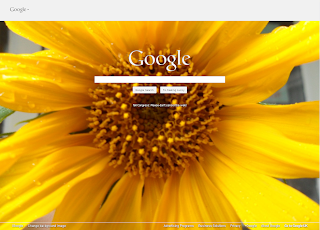 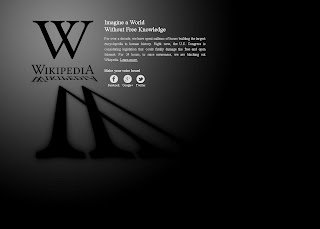 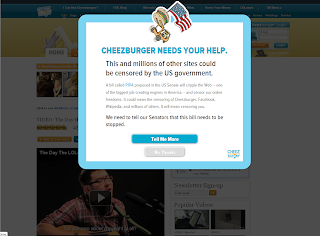 There may be other sites participating that I haven't happened to visit today... but the major players don't seem to be joining in. The exercise has achieved what it set out to do, however, and raised public awareness, not just in the US but globally, of the proposed legislation.

If you want to know more about the bills I'd suggest checking Wikipedia - once it's up and running again that is!
by Unknown at 2:12 pm
Email ThisBlogThis!Share to TwitterShare to FacebookShare to Pinterest
Themes: Internet
Newer Post Older Post Home