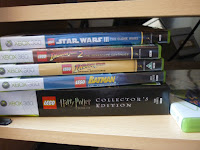 I love gaming. I'm a bit of a geek that way. These days the Xbox 360 is my console of choice, although my gaming life goes back to the Sega Megadrive!

My favourite games are the 'Lego' series. Currently I'm playing Lego Star Wars III. It's based on the Clone Wars cartoons (which I've never watched) but that doesn't matter. The fun is running around the little Lego worlds... and destroying bits of Lego in return for studs (which are the games' currency).

I've played them all... as you can see here (Lego Star Wars: II and the Complete Saga currently on loan to the Better-Half).

Now Pirates of the Carribean is coming... and of course the second half of Harry Potter. The great thing about the games is once you've played every level in 'story mode' (with only a limited choice of characters) you can go back and play 'free play' where you will have all the required characters with the skills to complete the level to 100%. This means that the games last for ages (Star Wars III currently 28 hours and counting!).
by Unknown at 5:02 pm
Email ThisBlogThis!Share to TwitterShare to FacebookShare to Pinterest
Themes: Console Games
Newer Post Older Post Home