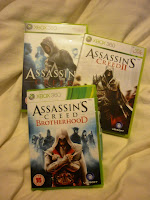 Sometimes trilogies are good - increasingly often trilogies are bad. Once upon a time things in threes (books, movies, etc.) arrived this way because there was a story still to be told... and in books this is often still the case. It is a modern curse though that successful franchises, in order to keep on making money, have a second or even third where none is needed... or it is so weak that they might not have bothered (sorry Fable III I'm thinking of you).

Not so Assassin's Creed Brotherhood. First off, it isn't really a trilogy. Assassins Creed centred on the sullen Altair; Assassins Creed II had the much more likeable Ezio as the hero. In which case this is really on the second (maybe why it isn't Assassins Creed III) because we're back with Ezio only moments after we left him at the end of the last game. Reassuringly everything is as we left it (I'm looking at you again Fable III); the Villa Monteriggioni is just as I remembered it... all the menus and controls are where you expect to find them - and Ezio is still running up the sides of buildings and perching on the edge of precipitous drops. I've not had much time to play yet but so far I'm giving it five stars... not least because there is a bit of a challenge to be had (yes, Fable III I'm looking at you again!).
by Unknown at 4:16 pm
Email ThisBlogThis!Share to TwitterShare to FacebookShare to Pinterest
Themes: Console Games
Newer Post Older Post Home