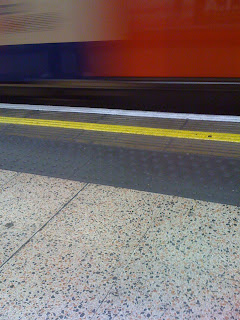 The Jubilee Line was not at its best this morning, which is unfortunate as neither am I.

I'm working a rare 5 day week this week (and 3 days next week) to get a deadline met. I'm tired, stressed and more than a little bit grumpy.

I missed the excuse (sorry reason) that the severe delays were affecting the line as I had my iPhone playing music to me. It was obvious that the signs in the bus station warning of the delays were not idle threats as soon as I got to the platform - crowds that were four or five deep at each door.

Fortunately the train wasn't full so I managed to squeeze on. The fact that both my hands are holding crutches so I have on means of holding a rail didn't seem to bother my fellow commuters - I managed to jam myself into a corner to reduce the risk of falling over. Crutches aren't like stabilisers - they don't help you stay upright on a moving, lurching tube.


Off we trundled. At Canary Wharf a few people got off and an unfeasible amount packed on. Even more unlikely at Canada Water nobody got off and a suitcase and buggy decided to force themselves in (even though there really was no room). We stayed at each of the stations, gently broiling in the heat, for five or ten minutes each. Bermondsey (where trains are inclined to stop for unreasonable lengths of time even when there are no problems on the line) brought another long wait, and amazingly two more passengers into the already over-subscribed carriage. At least my fellow traveller who almost knocked me off my feet did put a hand out to steady me.

You get the picture. It was slow, it was hot, it was packed.

I realise that in the rush hour when the train is very busy it is difficult for people to give up their seats to those who need them. I couldn't have manoeuvred top a seat even if I had been offered one. What annoys me is that nobody even seems to think about it. Not only did nobody offer me a seat but at least half a dozen people nearly kicked my crutches out from under me. Luckily it was so jammed I couldn't ever have fallen over!
by Unknown at 8:26 am
Email ThisBlogThis!Share to TwitterShare to FacebookShare to Pinterest
Themes: Travel
Newer Post Older Post Home