I am extremely fortunate that Rich has a great deal of patience and understanding when it comes to my Xbox addiction! Not only does he manage to put up with me hooking myself into the machine for hours at a time... but he even feeds my addiction by purchasing my games for Christmas, Birthdays, etc.

This year for Christmas it was the year of the sequels. The much loved 'Lego' series (by the incomparable Travellers Tales) has yet another new addition... Indiana Jones 2. 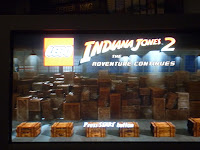 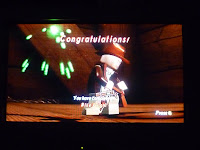 At the simplest level of gameplay you simply run around beating up the furniture and collecting the studs that fall out. There are a number of puzzles to solve in each level... but rather like crosswords once you understand the way the programmers think they aren't too challenging. The best thing about the game (all of the Lego games) is the sheer scale of them. There are the simple 'adventures' then there are enhanced levels (treasure levels in this game) then there are the final bonus levels... and this latest even has a level creator. I've been playing (a good portion of nearly every day) since Christmas and I'm about 50% through now! One of the greatest things about the games is the sense of humour... the achievements in this latest are all quotes from the movie - and all the games since the first (and possibly greatest) Star Wars Lego have a reference back to the Star Wars movies... this time it was Indy (played by Harrison Ford of course) seeing the carbon frozen block of Hans Solo (also played by Harrison Ford).


My other game was Assassins Creed II. Considering that Assassins Creed was the game that arrived with my Xbox I have made very poor progress in it. This is mostly explained by the fact that until the Xbox suffered the 'red ring of death' and had to go back to Microsoft to be fixed it used to crash during the game all the time. When it came back (running quieter and so much better) it never crashed again... of course by this time I had collected many other games that needed to be played (obsessively, usually) that I never got around to finishing it. 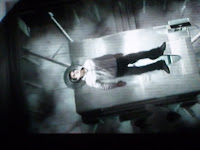 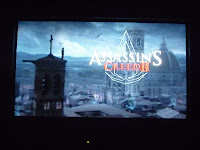 Assassins Creed II picks up where the first left off. Desmond is still getting hooked up to the Animus... not by the Templars this time but by some rivals and now it is the Animus 2.0 (which neatly explains the vastly improved interface). We've moved on from the Crusades and the Holy land and now find ourself in Sixteenth Century Italy. I've not got too far yet, although I was fairly thrilled by the three quick achievements at the start of the game for not really doing anything! 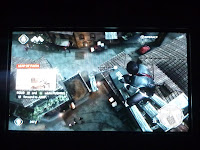 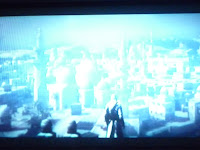 Altair and his out of place American accent (in amongst all those middle-eastern accents) has been replaced in the pantheon of Desmond's ancestors by Ezio (whose Italian accent is almost as annoying.) Like his ancestor Ezio has a penchant for climbing up buildings and taking swan-dives from the top of towers into haycarts. The graphics are just as beautiful as they ever were though, and comfortingly the soundtrack is still the same too. I'll have to play some more before I can give a real verdict though.
by Unknown at 5:27 pm
Email ThisBlogThis!Share to TwitterShare to FacebookShare to Pinterest
Themes: Console Games
Newer Post Older Post Home