One year on from Greenwich Council's new rubbish collecting initiative. The "GreenBlueBlack" system was introduced last February - and the last year has seen many examples of the system that doesn't really work (fellow local blogger Charlton Average documents the ups and downs of the new scheme in his area of the Borough).

The main problem with the scheme was that whether through ignorance or laziness a lot of residents simply didn't bother to sort their rubbish properly. This led to 'contaminated' bins not being collected. Although signs were put on bins (to the extent of screwing them to the lids) a significant proportion still failed to follow the system.

The system, for those who haven't come across one of my 'rubbish rants' before is simple. A weekly collection of two wheelie bins takes place. The blue bin is for 'dry recyclables' (paper, tin cans, glass, etc.) and the green bin is for garden and food waste. Simple. The very small amount of rubbish that doesn't fit either of these categories is collected fortnightly in a black sack. Here is the rub.

Number one - sometimes the blue bin requires a bit of work... out of date food has to be put in the green bin first and then the jar or tin washed out... containers must be rinsed (which can be done when you wash up).

Number two - what is left over has to be stored somewhere for a fortnight. We bought a small lockable bin from the Council for this - after all, our kitchen bin now takes recyclables and there isn't room in the kitchen for another bin! 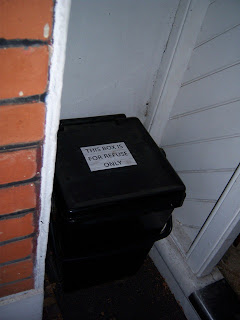 Our lockable bin
The Council has got fed up with the constant chaos caused by incorrect rubbish sorting, and probably (to a lesser extent) the rubbish caused by black sacks (shredded by foxes, left out for weeks, etc.). They have brought in black wheelie bins to take the place of black sacks. Ostensibly due to reluctance of residents to use sacks, although my suspicion to ease the problem of contaminated bins. Let's face it, will the black bins be checked on the same basis as the other bins and not collected if they contain rubbish which should have been in the green or blue bin? Doubtful. This is the Council admitting the defeat of their system and saving face by claiming it is all for our benefit. 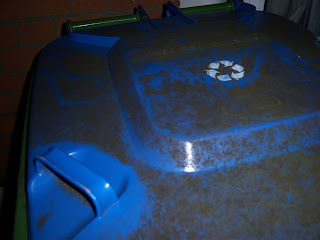 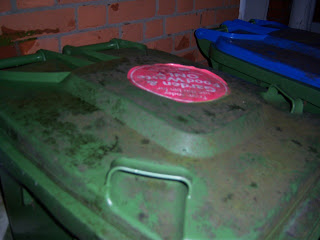 Green for food and garden waste (with helpful sticker) 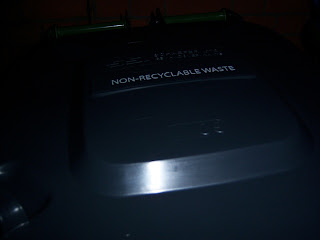