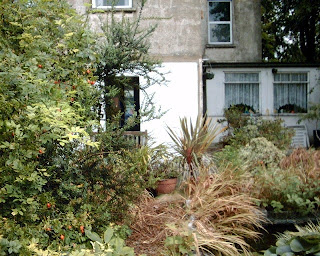 Once upon a time there was a small unloved space outside our kitchen. Once upon a time (before I knew it) it was a greenhouse; all that is left is the dwarf wall that supported the frame and the concrete floor. Nobody went on it much as the back door was blocked and the key was MIA. It was blocked by a bench that nobody sat on.

It stayed like that for about three or four years.
Then the kitchen was re-organised, the keys were dug out of the bureau and the patio was accessible to the back of the house. 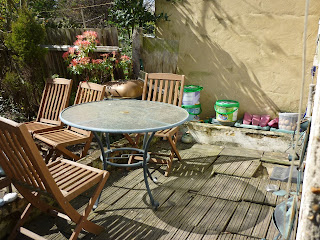 The first incarnation of the patio was close-spaced decking squares (hiding the plain and ugly concrete base). Decking was a good plan because it could be sawed easily to fit. It was a big hit with the frogs (they could get under at the back door and crawl between the supports). Unfortunately the laziness that is me and the garden meant that it was never treated and eventually the decking rotted away and needed replacing. Planks kept coming up making a trip hazard and more and more frogs and toads were deciding this could make a home (but not always finding their way back out again). 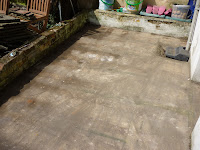 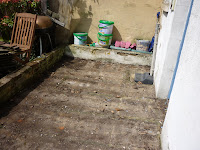 Incarnation two was unsatisfactory from the outset. 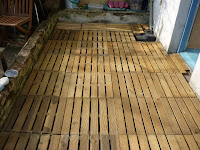 No close-boarded decking available in our price range.

The wide spacing meant a constant battle with weeds growing through the gaps. 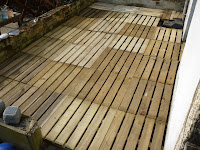 It was done properly though. The old removed, the patio swept, the new laid and treated.

It did a job, but from the day we laid it I hated it.


And then came what I hope is the final incarnation. A total refurbishment; thanks mostly to kind wedding gifts. Now it looks like a patio should look... thanks to Husband and all his hard work!