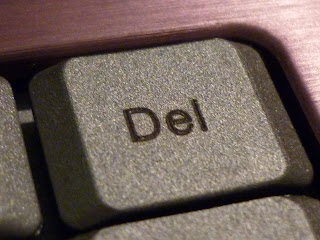 Imagine if every Thursday your shoes exploded if you tied them the usual way. This happens to us all the time with computers, and nobody thinks of complaining. (Jef Raskin, interviewed in Doctor Dobb's Journal).

Damn machines. The office computers have taken against me. All at once. One has a virus and must be rebuilt (on going); one wants to do a disk check everytime it is switched on and then gets stuck halfway through and has to get a hard boot (investigations being undertaken); two have had a blue screen of death (don't care unless they do it again).

I spent so much time on the phone with IT Support that the guy asked me if I had any other job or whether looking after the computers was all I did! All computers are now in disgrace.
by Unknown at 7:23 pm
Email ThisBlogThis!Share to TwitterShare to FacebookShare to Pinterest
Themes: Work
Newer Post Older Post Home