It's that time of year again. The streets of London are closed to traffic and hundreds of thousands of people take to the streets on foot to run twenty-six miles through the capital.

This year I slept late and missed most of the runners pass our section of the route. I'd seen yesterday, whilst out and about, that the new sponsors (Virgin) have taken things very seriously and the distance marker up the road from us had metamorphosed from a small sign tagged on a traffic island to a giant scaffold construction. More of that below.

I opened the back door to check on the decking (it rained over night) to hear the sound of pealing bells and steel drums. Better go lend my support, I thought.

Most of the runners had passed (it was half ten already) and the stampede had slowed to a steady trickle. 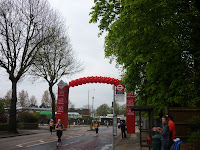 I'd noticed this route marker yesterday (trying to see round it whilst turning out of the adjacent junction, hard to miss) although it grew the balloons overnight. 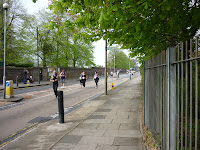 This is the tail end of the runners coming along our route - you can just see the chap in the full suit of armour in  between the lampposts on the right. That was actual armour too (I heard it clanking as he moved).

Other strange outfits was a giant (eight foot high) nurse; to bankers in full suits (including FTs and bowler hats); a squaddie (including his very heavy pack) and this year, replacing the rhinos, donkeys. 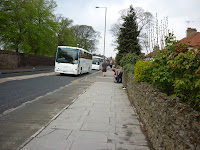 Before I even got as far as the Village the 'clean-up crew' was passing by.

These are the coaches which I assume are bringing the runners' belongings from the start of the race. 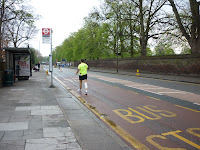 Just because the clean-up crew has gone by doesn't mean that the runners have. This poor chap was obviously in a lot of pain... I hope he makes it to the end. 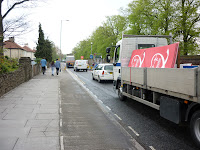 With even more ruthless efficiency the event organisers were following the clean-up crew with a set of lorries to dismantle the mile-markers and so forth. By tomorrow there will be no trace that the marathon passed by. 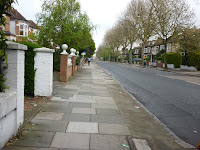 And the roads of South London are silent again (although the police won't open them to traffic for at least another hour) leaving perplexed motorists wondering why they can't take their cars out and small children taking full advantage of the quiet. As I saw coming back from the Village; a set of small children playing an impromptu game of football  across the silent road... until their father found them and asked them what they were doing "Playing football" came the response "Not in the main road you're not" responded the sensible parent.
by Unknown at 11:55 am
Email ThisBlogThis!Share to TwitterShare to FacebookShare to Pinterest
Themes: London
Newer Post Older Post Home