This morning we were sitting quietly in our office (waiting for the new router to arrive and re-connect us to the outside world) when we were disturbed by a tirade of horns sounding from the street below. Looking out the window revealed the culprits to be a large lorry and a badly parked high-end car which had reduced the road so much that the waiting lorry felt unable to progress. As I watched several taxis backed up the side street deciding to try another route (straight on, turn left, turn left again, brings you to the next turning from the opposite direction). A chap (I had assumed from the parked lorry) eventually directed the stranded vehicle through the gap (I knew it was wide enough!) - he then ran off down the street!

The bus stop nearest to my house has moved due to temporary closure of the next stop. It is now opposite the end of my street (hurrah). No-one told the bus drivers though as the bus to North Greenwich this morning stopped at the closed stop before the temporary stop. Even more peculiar is that the next stop is only a few hundred feet up the road. What can they be doing this time to cause the closure of the bus stop again. Maybe they are removing the abandoned couch from the grass nearby?!

As I just missed two buses at North Greenwich last night I was pretty certain of a long wait until the next one. I finally gave in to my curiosity and went to see the monument to Jackson. Of course most of it had been removed earlier that day but there remained a tribute wall which still seemed very popular, especially with this young fan who posed to allow me to take his photo. 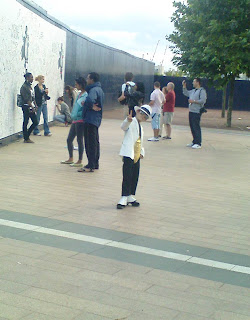 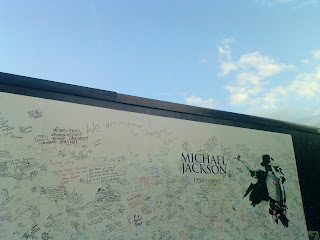