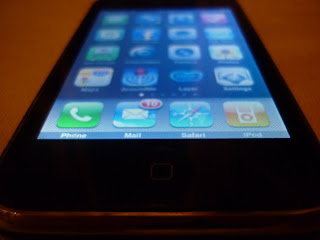 One thing that characterises the 21st Century for me is the ability to be constantly connected... to just about anything and everything.

Two weeks ago my phone contract expired... and working in an office with several iPhones I decided that what I really needed was an iPhone.

I was seduced by all those tempting Apps.

In the last fortnight I have learned several things. First (and probably most important) you are never going to use most of the Apps you install - pay for a few you think you will get a lot of mileage out of... go for free ones on the rest, then you don't lose anything when you change your mind and uninstall them!

Second (and more alarming) there is never going to be enough time. The iPhone talks constantly to the internet - email, Twitter, Facebook, blogs, SMS messages... the phone becomes like a new appendage!

When JFK was assassinated everyone remembered where they were when they heard the news... even a decade ago on 9/11 most people can tell you what they were doing at the time they heard. The constant exposure to information now means those type of global consciousness moments are probably a thing of the past.
by Unknown at 2:44 pm
Email ThisBlogThis!Share to TwitterShare to FacebookShare to Pinterest
Themes: Internet, iPhone
Newer Post Older Post Home