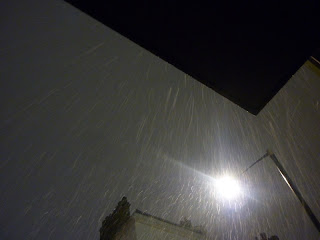 At around 4:15 Rich rang to warn me that it had just snowed heavily in Charlton and the snow storm was likely headed towards Central London. No, I said blithely, it's pouring with rain here. I looked out the window - at some point without me noticing the rain had turned to huge flakes of snow... and it was starting to settle.

I warned my colleagues and everyone began to don their winter togs with unseemly haste. I got outside the front door - yep, really snowing. 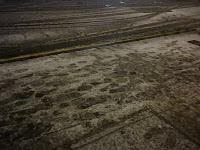 It was already settling on the (probably ungritted) side streets, and traffic (both pedestrian and vehicular) was all moving very gingerly. I was delighted to find when I arrived at Green Park station that the Jubilee Line was running normally... how little that was going to matter... as you will see.


I arrived without incident at North Greenwich. To hear the end of an announcement warning passengers to mind their step in the station as it might be slippery and wet due to 'adverse weather conditions' - oh, adverse indeed... as you will see. Delays to buses the announcer warns... one to two hours wait for a black cab the announcer warns. I get outside the station, there are no buses - not at the stand, not at the stops, not in view. The bus stops are mobbed. I make a decision to not wait but rather to walk home. 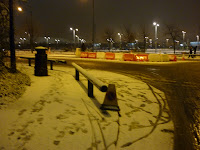 Off I set through the car park and off through the Peninsula. It has stopped snowing, at least.

This is looking back through the car parks towards the Dome. The roads are pretty impassable at this point - I've seen the gritter about but he hasn't been this way yet. 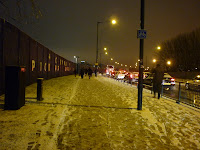 Moving along towards the roundabout near the tunnel approach interchange - the traffic doesn't appear to be moving much. It is harder to walk here as the snow is turning icy from the foot traffic.

I'm not the only one who has given up waiting for buses and decided to walk though! 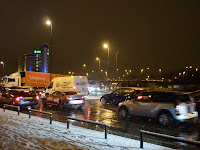 Roundabout near the Tunnel - traffic isn't moving up on the A2 either. The roads look a little better here, probably from sheer weight of traffic. 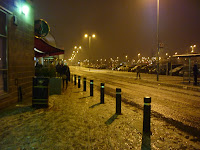 Finally reached the Cinema and Sainsbury's. The earlier snow has now been replaced by rain. The pavements are beginning to get very slippery as snow turns to slush... or even worse ice. 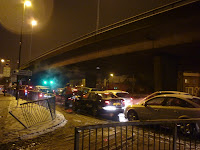 Woolwich Road Flyover. Raining quite hard now... traffic still not moving in any direction. My feet are getting very wet by this point as slushy mushy snow-ice invaded my boots. 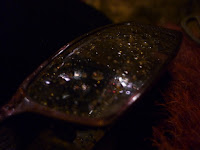 I actually had to take my glasses off. The rain and my breath meant that they got fogged up... I figured that seeing only a few feet in front of me was probably better than seeing nothing at all through the mist. 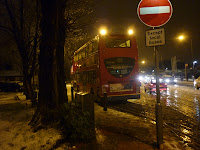 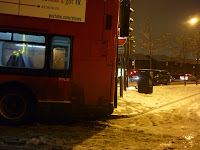 Ah, here are all the buses! Three 486s stopped at Charlton station, one seems quite literally to have gone backwards into the traffic islands. 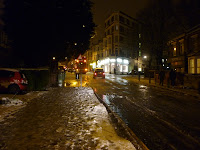 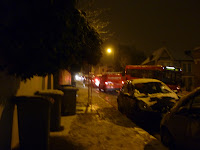 And here's another 486 - given up halfway up Charlton Church Lane... and another bus got stuck coming in the other direction. 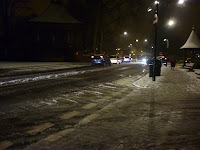 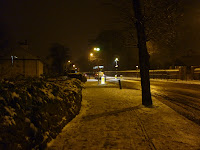 There is not traffic up in Charlton Village though. Although, look, at last - a bus! 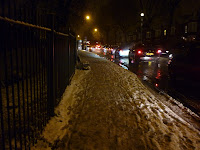 At last! Nearly home. That is my bus stop... suddenly an amazing amount of traffic again. 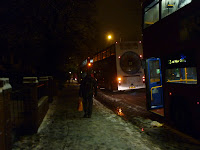 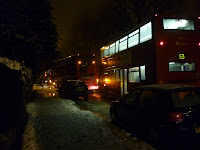 But the mystery of what happened to all the buses is solved. Operation Stack (where they park lorries on the M20 when there is trouble at the Channel Ports) seems to be operating on Littleheath. I counted eight buses in this queue.

I took about an hour and a half and it was about 3 and a half miles... but I beat the weather and the traffic and get home! So - how much snow caused all this chaos... inches and inches surely. 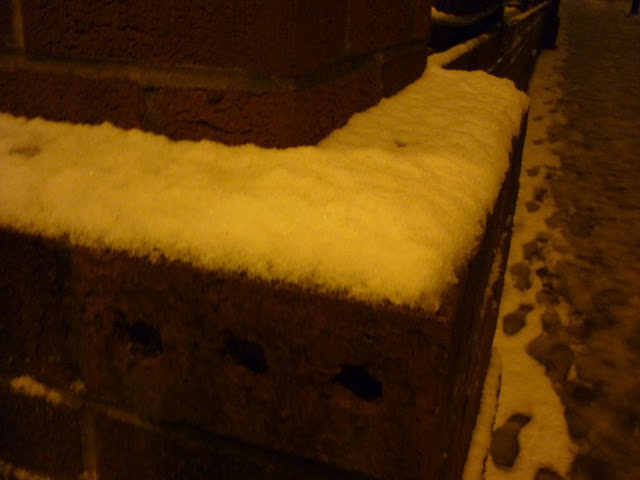