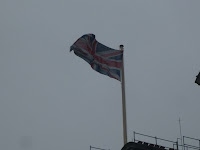 Unless you've been living under a rock you can't have failed to notice the news this week of the engagement of second-in-line heir to the throne Prince William's engagement to long-time girlfriend Catherine.

Personally I wasn't very interested. Neither were most people I know... one of my colleagues did go as far as to wonder if we'd get an extra Bank Holiday when they get married, but that was the extent of the conversation in our office.

I'm not very interested in Royal goings on these days - but that wasn't always true. I was a huge fan of the Royal family as a child. When Prince Charles got married I had a cardboard Diana doll that you could dress in different outfits (that is what passed for interactive back in those days!). My brother and I were taken by my mother to see the flowers at St Paul's (and again to Westminster Abbey after Prince Andrew's wedding). I drew a few pictures (the one I parcticularly remember was off the Queen and Prince Philip dressed for an official occasion) I would post them off and get a nice letter of thanks from a lady-in-waiting. When Prince William was born I had a great big coffee table book called "Born to be King".

I'm not sure when I lost interest in it all... but I have to confess skipping the pages in the newspaper relating to the story and not bothering to get an Evening Standard that evening.
by Unknown at 4:04 pm
Email ThisBlogThis!Share to TwitterShare to FacebookShare to Pinterest
Themes: News
Newer Post Older Post Home