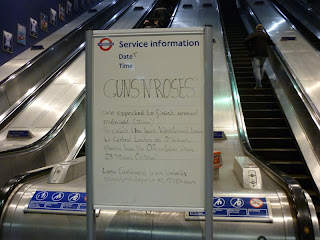 This would, by all accounts, be quite difficult if you were going to see Guns 'n' Roses at the O2 this week. The band is famous for arriving late for performances - making your way from the inside of the main arena at the O2 back to North Greenwich underground station would probably leave you with no way back to Central London as the last tube going west leaves just after quarter past midnight. Granted you can still go East until gone 1am - and provided that the Blackwall Tunnel is open you can still get the 108 to East London - failing that there are always a reasonable amount of licensed taxis on the taxi rank.

However, I cannot take any venue seriously that has to warn customers to leave early in case they get stranded.
by Unknown at 3:24 pm
Email ThisBlogThis!Share to TwitterShare to FacebookShare to Pinterest
Themes: London, O2 (Dome)
Newer Post Older Post Home